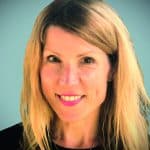 Corporate directors across the globe are now wrestling with how to respond to the growing demands of shareholders and stakeholders to link boardroom decision- making with corporate sustainability. The decade-long rise of environmental, social, and governance (ESG) investing has resulted today in a sharp focus by board members on matters ranging from diversity and inclusion to carbon emissions or supply chain labour standards.

But how can directors parse the various topics to better understand where investors want them to focus? One means of informing directors on where to direct their time and attention on ESG matters is by gauging the prevalence of, and support for, environmental and social (E&S) shareholder proposals which, while largely directed at companies in the US, are evident across a number of global capital markets.

Indeed, of 626 E&S resolutions tracked in 2020, 2021, and 2022, 456 (72.8 per cent) were at US companies, according to a recent analysis by my firm, ISS Corporate Solutions. (In order to create a matched sample for the three years, data were extracted for all meetings between 1 January and 31 May for each year. Included in the total proposals of 279 for 2022 were 48 resolutions which had either not been voted or where vote tallies had not been disclosed.) Not only that, but the topic of E&S remains relatively elusive when compared with investor resolutions on matters pertaining to corporate governance. Of the 47 countries where any kind of shareholder resolution was filed during the three years under study, only 11 countries saw E&S resolutions on the ballot at companies in their jurisdiction.

Despite the overall increase in the number of shareholder proposals, the growth in the number of resolutions receiving majority support has been spotty. In aggregate, 2021 was the most successful year so far for proponents, with a total of 35 E&S resolutions receiving majority support, compared with 19 in 2020 and 24 in 2022. 2021 was the peak year for both environmental and social resolutions. On the other hand, substantial minority support has increased consistently over the three years examined. Resolutions receiving more than 30 per cent support increased from 63 in 2020, to 81 in 2022. However, that increase was not distributed evenly across both environmental and social proposals. The count of social proposals receiving at least 30 per cent support fell slightly in 2021, from 52 to 49, then rose again in 2022 to 59. For environmental proposals, it increased from 11 to 27 between 2020 and 2021, then fell back to 22 in 2022.

With the exception of Canada, social proposals are rare or unknown in most other countries. Social-issue proposals have occasionally been filed in Australia, Denmark, and Norway, but few of these have received any kind of even significant minority support. While significant minority support for social proposals has remained fairly steady in the US over the past three years, at around 50 each year, this level of support for environmental proposals doubled between 2020 and 2021 (from nine to 20) and remained there for 2022.

Broken down into subcategories, the trends in support of different kinds of social and environmental resolutions tell a more granular story. For example, resolutions on diversity, equity and inclusion (DE&I) – which often ask for reporting on diversity data or for action to improve DE&I within the workforce – were filed only beginning 2022 and received majority support at six companies and more than 30 per cent support at 17 in that first year. At these levels, support for DE&I proposals surpassed support levels for other, more general, human capital management resolutions, though these were also popular with shareholders, with 17 receiving majority support over the three years studied and 31 receiving more than 30 per cent support. 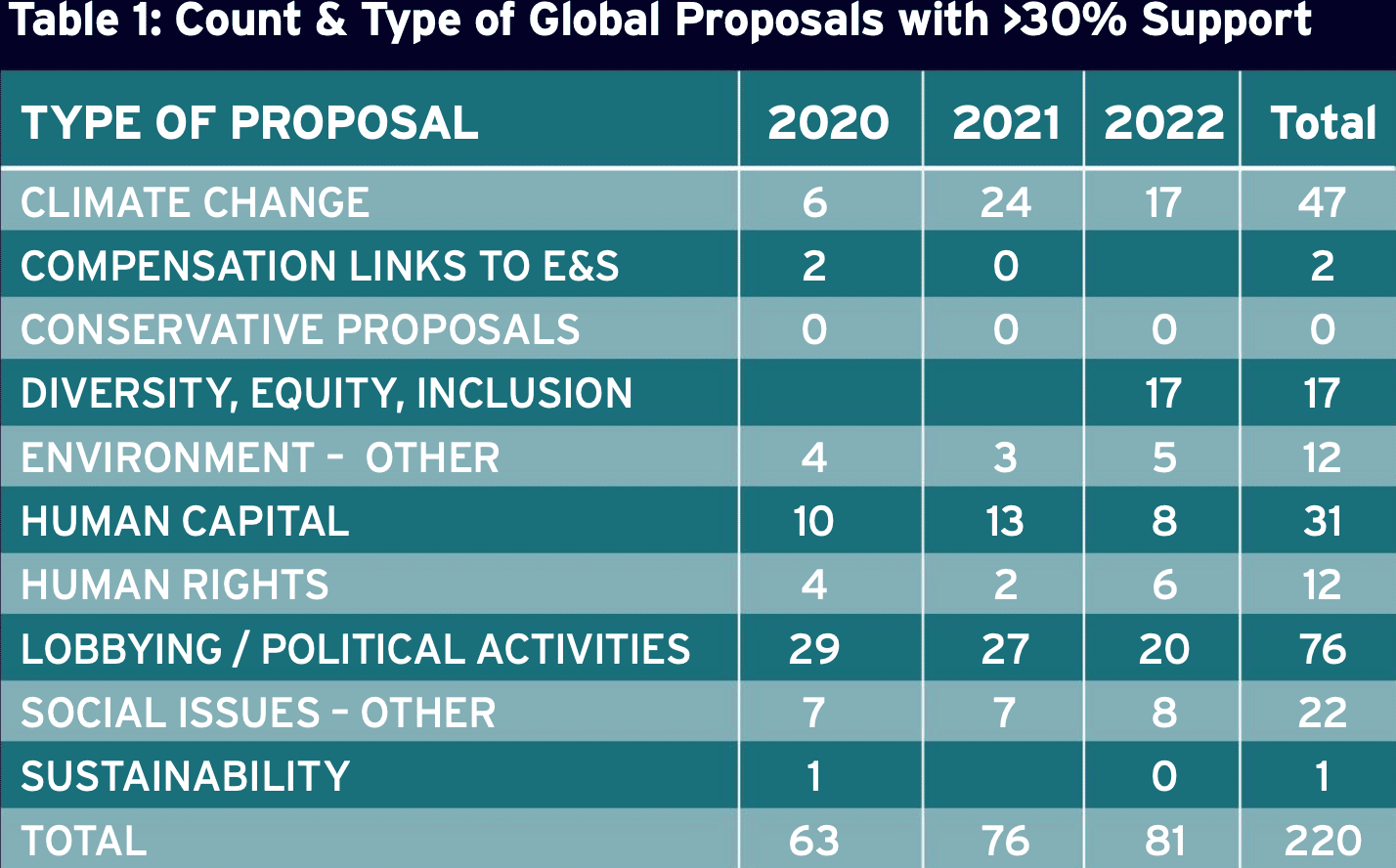 While most of this level of support was for proposals in the US, Australia saw two proposals receive majority support on climate change, with a similar number in Canada. In addition, in Canada, a ‘say on climate’ resolution received majority support, as well as two proposals calling for reporting on policies and practices regarding indigenous peoples’ communities, and one on a report on racial diversity in the workplace.

A CLOSER LOOK AT THE US

The larger sample size for US proposals allows for a more detailed analysis by index. Unsurprisingly, the largest companies, those in the S&P 500, were not only the main focus of shareholder activity in this area, but also the main area of majority support. Some 51 of the 68 majority- supported E&S proposals were at companies in the S&P 500; 21 of them environmental and 30 social. Support for proposals of more than 30 per cent show similar findings, with 175 of the 205 resolutions with this level of support occurring at companies in the S&P 500. the largest number of the other resolutions that received support of more than 30 per cent was found in the midcap index − the S&P 400 − at 18.

While most majority-supported resolutions fall into the social category, a more granular analysis shows that shareholders supported some social resolutions more than others. For example, in the S&P 500, majority support was focused on climate change (17), human capital (11) and lobbying/political activities (12). Majority support for all other types of resolution was in the single digits. On the other hand, majority support was more evenly distributed in the S&P 400: one on climate change, one on DE&I, one on human capital management, and one on human rights.

Much is expected of corporate directors today, given most companies’ rapidly diversifying shareholder base and the varied perspectives those investors bring, making effective and comprehensive board oversight more challenging than it was a generation ago. But at least when it comes to addressing the new environment where corporate sustainability is in sharp focus, board members will know that monitoring and understanding the shareholder proposal landscape, both globally and in their home market, will give them a leg up when setting corporate ESG priorities.

Marija is Head of ISS Corporate Solutions Inc. (ICS), a separately managed subsidiary of Institutional Shareholder Services Inc. (ISS) that helps companies design and manage their corporate governance, executive compensation, and sustainability programs to align with company goals, reduce risk, and manage the needs of a diverse stakeholder base by delivering best-in-class data, analytics, and advisory services. In this role, Marija is responsible for setting the strategic direction of ICS’ product portfolio, development roadmap, client advisory, and client coverage teams.

Marija previously served as Head of ISS’ ESG business unit. She was instrumental in identifying and securing external growth opportunities, globally, for the ISS ESG business and has been a frequent speaker at industry events covering topics ranging from ESG integration to climate impacts across industries and sectors. Marija’s expert commentary is frequently cited in major business and industry print titles, including the Wall Street Journal, Financial Times, Reuters, and Responsible Investor, as well as featured via broadcast outlets such as CNBC. She holds an M.B.A. from American University’s Kogod School of Business.