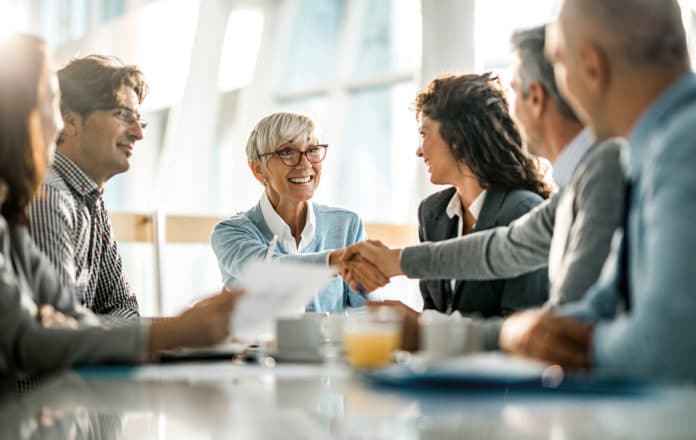 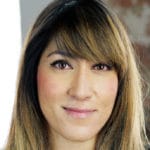 With another proxy season in the books in the US, it’s helpful to look at the trends that dominated 2019 and are likely to continue into next year. As you gear up to meet with your investors, knowing what’s on their minds can help you better engage, set your strategy and prepare for any activism or challenges that may come your way.

My team at D.F. King examined the data and identified several prevailing themes – here’s what we found:

Shareholder proposals: Social issues were out in front

Social issues took the lead. Approximately 60 per cent of shareholder proposals in 2019 were related to environmental and social requests. The number of social proposals submitted in 2019 increased by approximately 45 per cent over the previous year, buoyed by submissions including campaigns for lobbying and political contribution disclosures and human rights – likely due to the current political climate – as well as board diversity. Submissions regarding political contributions and lobbying requests have increased by 14 per cent, and more than half of proposals that went to a vote received more than 30 per cent support.

We also saw a significant increase in human capital management-related (HCM) proposals in 2019; for example, 82 per cent of all employment diversity-related shareholder proposals went to a vote this year, compared to just 30 per cent in 2018. Gender pay gap proposals that went to a vote increased by almost 250 per cent as well, and proposals related to sexual harassment were newly introduced this year, with almost all of them making it onto ballots. Notably, when it comes to E&S disclosure, the largest increases of disclosure provided by companies typically fall under HCM, covering topics including employee diversity and training, pay/benefits and employee feedback.

The topic of greater board diversity also continues to gain momentum, with large asset managers increasingly articulating their support for it. More than 80 per cent of the increase in the number of female directorships in the past decade occurred during the past five years, with annual growth of female directorships exceeding seven per cent in each of the past three years. This is likely to increase in light of the emerging regulation of board diversity, which certain states are in the process of implementing, as well as the updated voting guidelines that many institutional investors have published to emphasise their focus on board diversity (See Figures 1 above and 2, below). 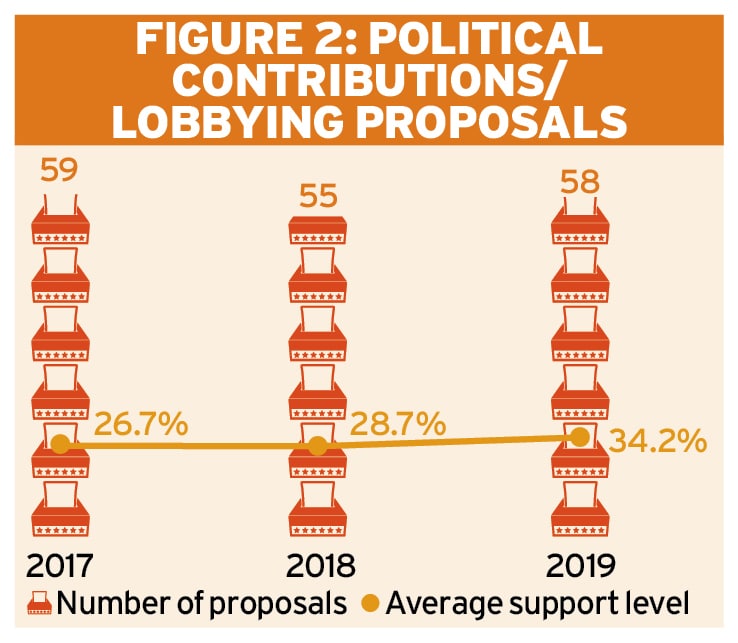 Only a quarter of environmental proposals actually made it onto ballots, likely driven by increased transparency and collaboration with shareholders

Issuers are increasingly willing to engage with investors, which has likely led to more of these proposals being absent from ballots – in addition to the fact that nearly 50 per cent of challenged environmental proposals were provided no-action relief by the Securities and Exchange Commission (SEC) this year, the highest percentage in more than three years.

Proposals with the highest support levels typically requested greenhouse gas goals or climate change reporting. There were fewer submissions and reduced levels of support, also likely due to increased disclosure across all industries as well as efforts to discuss environmental initiatives with investors. One hundred proposals were submitted (down 28 per cent from 2018), and average support for all environmental proposals decreased to approximately 26 per cent in 2019 from 31 per cent in 2018. 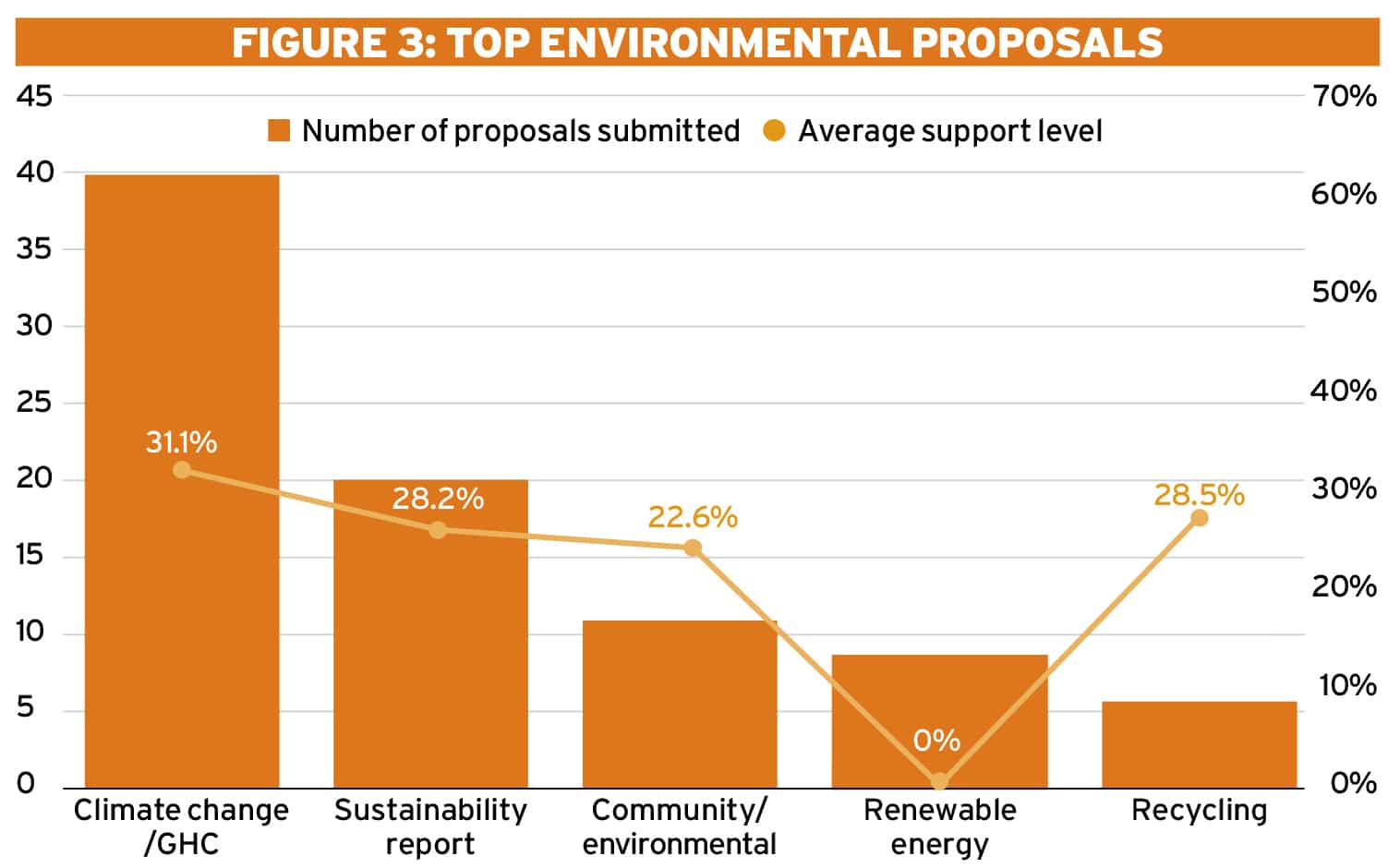 Governance and, specifically, board composition continue to capture attention

Governance-related shareholder proposals remained the most common type to bevoted upon, though they were surpassed in submissions by proposals with social requests.

Investors are keeping a close eye on boards, continuing to scrutinise them for issues such as a lack of diversity and overboarding – many of the largest asset managers have recently updated policies regarding these two topics, and this year we saw those policies impacting vote results for directors. In addition, board-related shareholder proposals on topics such as independent board chair, board declassification, majority voting for director elections, and seeking to adopt or amend proxy access constituted nearly half of all governance-related shareholder proposals.

There were significant increases in requests to adopt majority voting for the election of directors as well as requests to reduce supermajority voting; the submission levels for these proposals increased by 222 per cent and 50 per cent, respectively. Although average support for majority voting for directors dropped to approximately 42 per cent, average support for proposals requesting to reduce supermajority requirements remained high at approximately 65 per cent.

‘While the overall number of shareholder proposal submissions declined in 2019, the proportion of environmental- and social-related proposals grew’

Although requests for independent chair took the lead in submissions, none passed. Shareholders are typically satisfied when a sufficiently empowered lead independent director is appointed as an alternative to mandatorily separating the CEO and chair roles.

When it comes to governance-related shareholder proposals, overall pass rate continues to decline. This is due in large part to a reduction in the relative number of proposals relating to proxy access, majority voting and board declassification, a result of these measures becoming market practice among larger companies. In 2019, 13.8 per cent passed, compared to 17 per cent in 2018 (See Figure 5: Spotlight on Board Diversity Initiatives by US State). 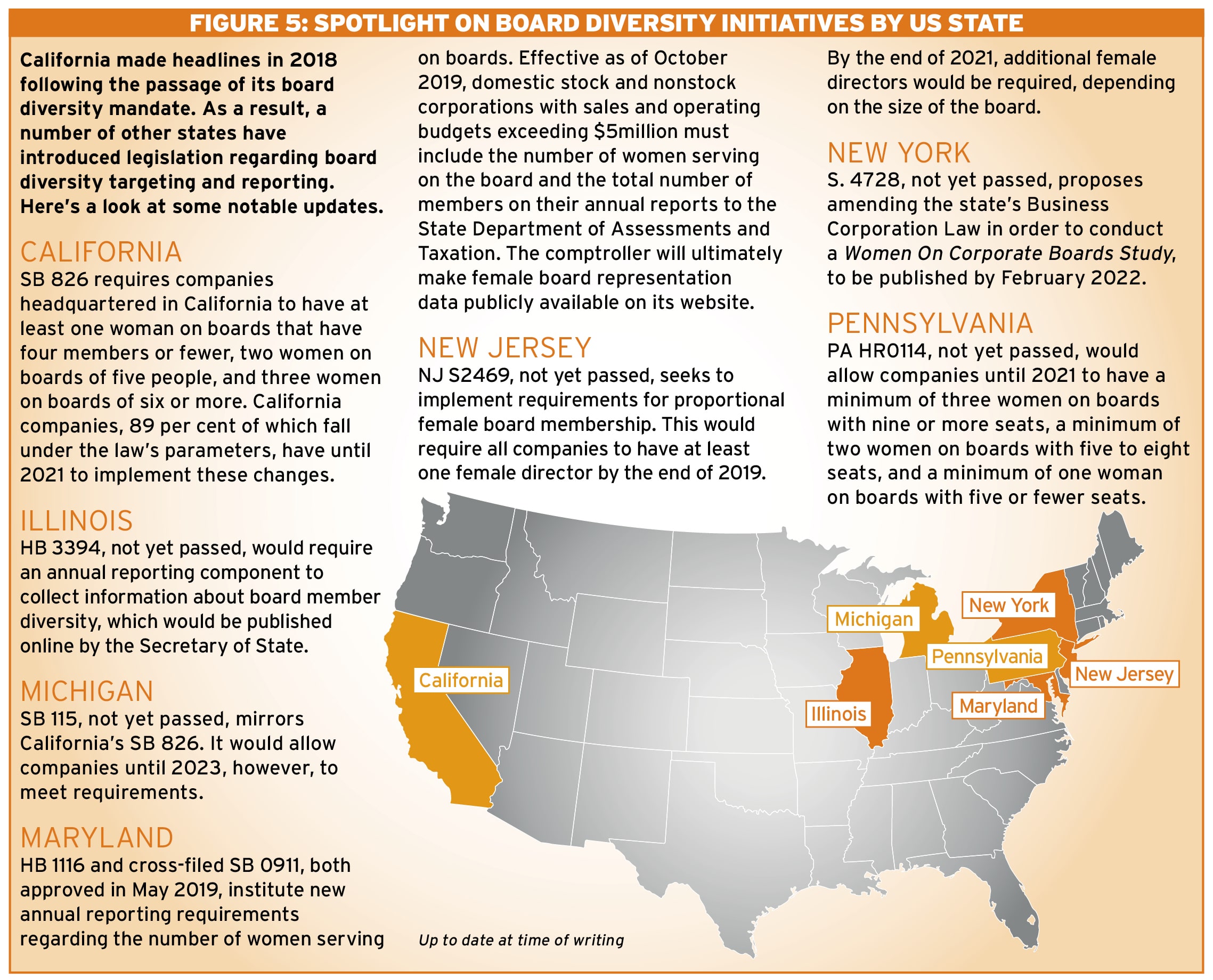 Say-on-pay results remained in line with 2018 levels, with average support remaining high at approximately 90 per cent. Equity plan approvals remained uneventful, with only two failures recorded for 2019. The number of equity plans placed on ballots decreased from previous years, likely due to the elimination of the 162(m) provision that required shareholder approval of performance goals in incentive plans every five years.

Requests to reduce supermajority thresholds typically have the highest levels of shareholder support. Although historically the top 10 has been dominated by governance proposals, over the past few years, the landscape has evolved to focus primarily on environmental and social initiatives. 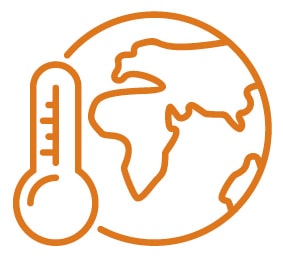 In 2019, companies challenged nearly 30 per cent of shareholder proposals through the SEC no-action process. The two most commonly challenged kinds of proposals were environment-related requests (15 per cent) and requests to eliminate supermajority voting (10 per cent). The most successful categories for exclusion were proposals to reduce special meeting thresholds as well as animal rights proposals, which both currently have a 100 per cent success rate. These were followed by human rights proposals and proposals to eliminate supermajority voting, which both had success rates near the 80 per cent mark.

Ordinary business exemptions: In late 2018, the Division of Corporation Finance issued Staff Legal Bulletin No. 14J (SLB 14J), which provided guidance on the exclusion of shareholder proposals on the basis that they seek to ‘micromanage’ the company. SLB 14J detailed that, under the ordinary business exception, a company may exclude a proposal for micromanaging if it ‘involves intricate detail or seeks to impose specific timeframes or methods for implementing complex policies’. As a result, nearly two-thirds of climate/greenhouse gas proposals have been challenged and the SEC has provided no-action relief to more than 45 per cent of these proposals, which is the highest percentage we’ve seen over the last three years.

As you speak with shareholders this fall, expect to see a lot of attention on human capital management and board and management composition, as well as a continued focus on executive compensation. Keep in mind, for governance teams at today’s largest investors, value and values increasingly go hand in hand.

Prior to joining D.F. King, Zally managed the North American Research department at Glass Lewis & Co., where she led research teams responsible for analyzing and engaging with over 6,500 North American companies. At Glass Lewis, Zally played a key role in the development of voting policy guidelines, aided in the creation and maintenance of models used to analyze executive compensation, led hundreds of engagement meetings with companies and institutional investors, and co-authored a variety of special reports capturing trends and developments in corporate governance. 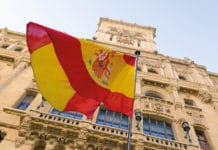 Debate Over Proxy Advisors Rages On