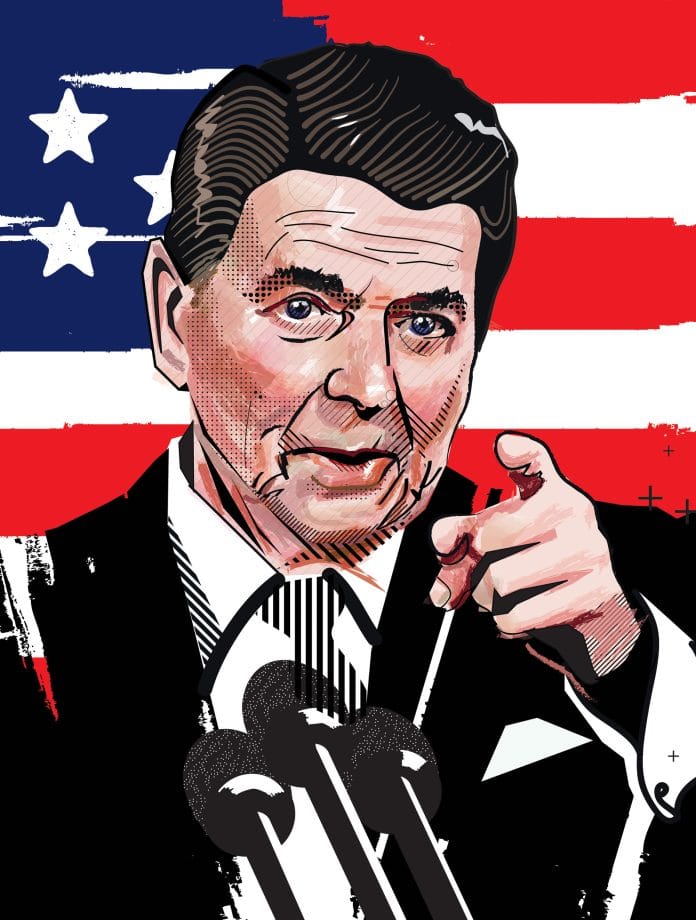 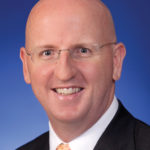 On the occasion of his 34th and last speech to the US on 11 January 1989, President Reagan reminisced about his years in the most powerful office in the world.

In the catalogue of his observations on the economy, Gorbachev  and returning to his beloved California, he commented on how he was seen. “And in all of that time,” President Reagan said, “I won a nickname: ‘The Great Communicator’. But I never thought it was my style or the words I used that made a difference: it was the content. I wasn’t a great communicator, but I communicated great things.” 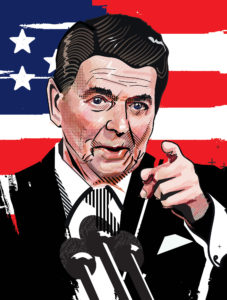 I was reminded of Reagan’s self assessment many years later when I was, of all places, standing before a group of graduates recently inducted into the kaleidoscope world of a professional accounting firm. From the back of the room, one of the freshly minted future partners 15 years hence raised her hand and asked a question that in all my years of presenting I had never been asked before.

“Mr McLeod,” she said, giving me a status and seniority that I didn’t deserve, “what is the single most important thing in a company?”

For a question so simple I found myself confounded. Was I to speak on behalf of all companies dating back to the invention of the word in 1150 – interestingly my research tells me that it comes from the old French military term compaignie meaning a ‘body of soldiers’ via the Latin word companion ‘one who eats bread with you’  – or should I narrow my scope of reference? Was I being asked to opine on a prioritisation of all issues that a company may face? 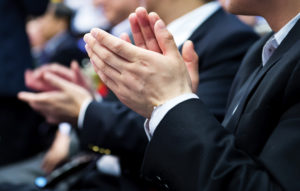 Practicality – and the limits of my imagination – dictated that I respond with a reference point of the (then) previous 20 years.

Just at that moment, when I was about to proceed to the next question, I heard the same questioning voice ask that most dreaded of follow up questions: “So, Mr McLeod, what does that mean?”

I then took the audience, now aching for something akin to a presentation scuffle between the presenter and the questioner, away from their smartphones and talked to them about my violin theorem.

I struggle now – as I did that day with my governance inquisitor – to think of any catalogue of music that I hold dear that has not been graced by the orchestral descendants of Stradivari. And it is the same with an organisation.

In my many years of reviewing what makes a strong company, the only constant determinant of strength is that it is an organisation that communicates well. I have never seen a strong company that has poor communication.

As I retook the momentum in the speech from my governance inquisitor – in the manner of a general defending his flank – I remained perplexed by what it was that I exactly meant when I said communication.

The professional risk or audit manager needs to be a good communicator. It is no longer possible – if indeed it ever was – to be a technical brilliant observer whose communication efforts were at the other end of the stakeholder engagement skills seesaw. So what is it that makes a good communicator in the field of governance, risk and audit?

Not surprisingly, coming from an auditor, it is the view that for one to be able to determine what makes a good communicator you need a dispassionate framework against which to measure your judgment.

The framework that we have chosen is objectives; audiences; messages and medium. Taking each one individually:

Governance, risk and audit professionals often get this wrong and their failings undermine all their future efforts. As obvious as it is to say it, the objective is the essential ingredient in your communication strategy. Too often we see this step being overly complicated or nuanced.

We have seen communication strategies based on fear (‘you have to do this or you will get into trouble’) or arrogance (‘you have to do this because we said so’). For us – the communication objective for a governance, risk and audit professional should be the betterment of how the organisation that you are working with manages risks and opportunities.

There is no other raison d’être. Why does your function exist if it is not for the tipping of the risk/reward scale in your organisation’s favour? You need to be viciously clear about the objective as it will inform everything that you do in terms of engagement, influence and assurance.

Equally, you need to be sure at this early stage that you have taken your stakeholders along on the proverbial ride with you – a misalignment between their expectations (‘we thought you are only the policeman’) and your expectations is fatal.

Don’t underestimate how valuable a well- articulated objective is in reinforcing your importance and providing the basis for a proper resourcing of your strategy and function within an organisation. It is important to remember the setting of objectives is not the end in itself – now the real fun (and challenges) start.

Imagine for one moment standing on a stage before a gender, age and culturally diverse collection of people (not to mention some that are sitting there looking at their smartphones and playing Candy Crush) singing an Italian aria with the backing music of death metal.

What would be the experience for those ‘lucky’ enough to be in your presence? What is it that they would remember from the experience?

It is reasonable to assume that the audience would walk away disappointed, confused as to what you were doing and highly unlikely to rush to social media to recommend your best efforts to others.

Yet, yet, yet – this is exactly what many people do when it comes to promoting subject matter expertise or function to their respective audiences. For a governance, risk and audit professional there are many differing levels of audience and each has different needs.

Starting at the top is the audit committee – as custodians of the interests of shareholders they should be the ultimate focus of your communication strategy.  How are you letting this constituency know that management has in place the appropriate systems, procedures and controls?

Are there some teams that need to hear your message, irrespective of their seniority (hint – it is good for all finance professionals to understand the importance of good governance, strong risk management and effective internal auditing)?

Choose your audience well. One thing that has yet to be invented is a day with more than 24 hours in it. Until such moment as the time space continuum is disrupted, you will need to prioritise your communication effort.

There is nothing more debilitating than to have delivered the right message to the wrong audience – much like singing an Italian aria with the backing music of death metal, really!

You have taken the time to set your objectives in a measured and properly socialised way and segregated your audiences based on a pre-set criteria only to then try and think on your feet as to what is the message that you want to convey.

As basic as it again sounds – know what you want to say ahead of time.  Plan out what it is that you want and need your audience to hear.

One of my all-time favourite books is from – here he is again – the speechwriter to President Reagan, Peggy Noonan.  Noonan was the gifted speechwriter behind Reagan’s most famous and poignant ‘face of God’ tome after the Challenger space shuttle disaster.

“In my many years of reviewing what makes a good company, the only constant determinant of strength is that it is an organisation that communicates well. I have never seen a strong company that has poor communication”

Equally, we are story tellers and story listeners. Why is it that the moment we put on our security pass and log into our work computers we leave behind eons of evolution as to how messages are best remembered?

What is the interesting narrative that you are trying to construct?  What is the human interest angle in the story and what, if any, imagery can you use to better convey your message?

In the world of governance, risk and audit there are few better narratives than a fraud. Once a fraud has happened within an organisation (and stopped) you might as well make good of a bad situation by deconstructing the fraud and seeing where the processes fell down.

It will create an interesting narrative (Enron, WorldCom or Madoff anyone?); there is a human element to the story (what drove that person(s) to take themselves over to the dark side of ethical behaviour;) and – at least in the United States with their great love of public humiliation at the time of arrest with the perp walk– you may be lucky to have imagery.

Imagery doesn’t need to be photos, though – a graph can tell a story as effectively as an essay (other than this one, of course!). Remember also, the need to define the immediacy of your message – some messages need to be communicated with a great sense of urgency and others are slow release.  Don’t confuse the two.

Too often a function’s communication strategy is determined by which medium they will use rather than going through the process set out above. That should not however undermine the importance of choosing the correct medium.

“Some messages need to be communicated with a great sense of urgency and others are slow release. Don’t confuse the two”

For as long as we can remember, the chosen medium of the governance, risk and audit professional has been the report. A report, well written, is a story to behold. Too often, however, they are not well written and fall into that most despised of categories – received but not read.

So the challenge then to us all is to find more appropriate or complimentary media – visualisation; (the occasionally dreaded) PowerPoint; dramatisation; podcasting. We need to communicate in a manner that our audience wants to consume the information, not in the way we want to communicate it.  There is a fundamental difference.

Perhaps the last words are best left to President Reagan. As the curtain closed on one of the most important presidencies of the modern era, he made one final observation about his impact on the United States.

“We did it.” he said. “We weren’t just marking time. We made a difference. We made the city stronger, we made the city freer, and we left her in good hands. All in all, not bad, not bad at all.”

On a different scale and different stage, may you say the same of your journey.

The key factors in selecting and retaining external auditors