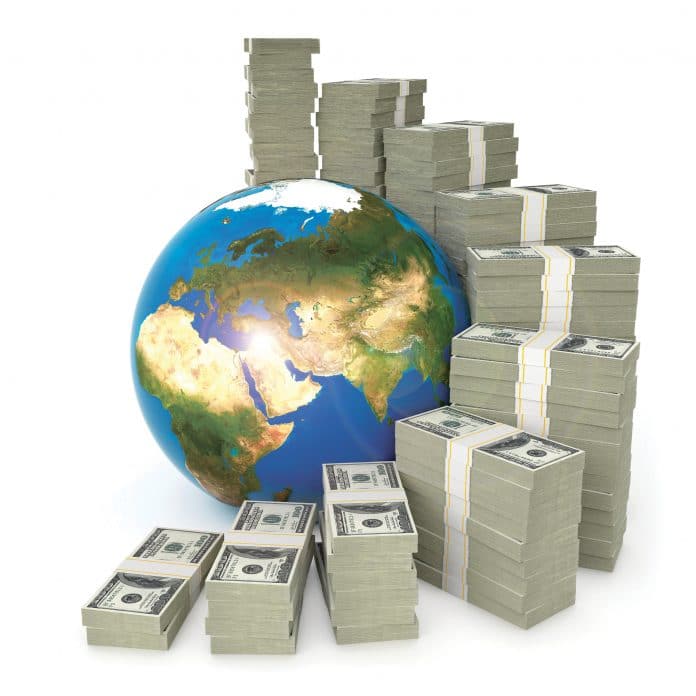 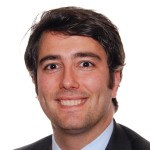 In recent years, ‘say on pay’ has acquired an increased importance in governing the relationship between management and shareholders. The opportunity for shareholders to express their view in matters such as the definition of remuneration policies, at one time the sole domain of the board of directors, has paved the way for a resurgent activism by institutional investors.

Transparency, the alignment of objectives to the long-term interests of the company and risk mitigation have become key phrases in the engagement process between companies and shareholders. This is a historic moment, which may reshape the market power plays, such as those in southern Europe, which have been traditionally dominated by strategic shareholders and by potential conflicts of interest.

The Italian market is characterised by a high concentration of share ownership. For this reason, the regulator has increasingly introduced safeguards to protect minority shareholders, especially in regards to management remuneration.

A shareholder binding vote on remuneration policies was introduced for financial institutions in 2009. Say on pay became mandatory for non-banking issuers in 2012, but in this case the shareholder vote is advisory and applies only to the forward-looking section of the report.

It must be emphasised that the remuneration report always itemises the amounts paid to individual directors in the previous financial year, breaking down the figures to different compensation categories, as well as comparing the CEO’s compensation to the rest of management as an aggregate. In this case, Italy clearly favoured the transparency and accountability of directors over the protection of personal data.

“During the first three years of say-on-pay implementation, Italian-listed companies have moved consistently towards best practices in governance”

In 2014, minority shareholder participation reached, on average, 25.5 per cent of share capital, compared to only eight per cent in 2005 (FTSE Mib index). The first three years of voting on remuneration policies in Italy have highlighted the importance of foreign investors, which have proven to be more important than all the other shareholder categories with regard to financial exposure and to shareholder meeting activism.

In general, the approval level for remuneration policies is equal to approximately 91 per cent of share capital and consistent with the principal reference markets. A more in-depth analysis, which considers only the votes cast by minority shareholders, reveals that in 2014 only 74 per cent of them approved remuneration policy reports. The data shows a progressive alignment between institutional investor expectations and actual remuneration practices of Italian-listed companies. The dissent manifested in the previous year was even more significant – 66 per cent of minorities supported approving the resolution (while in 2012, the percentage was even lower at 57 per cent). 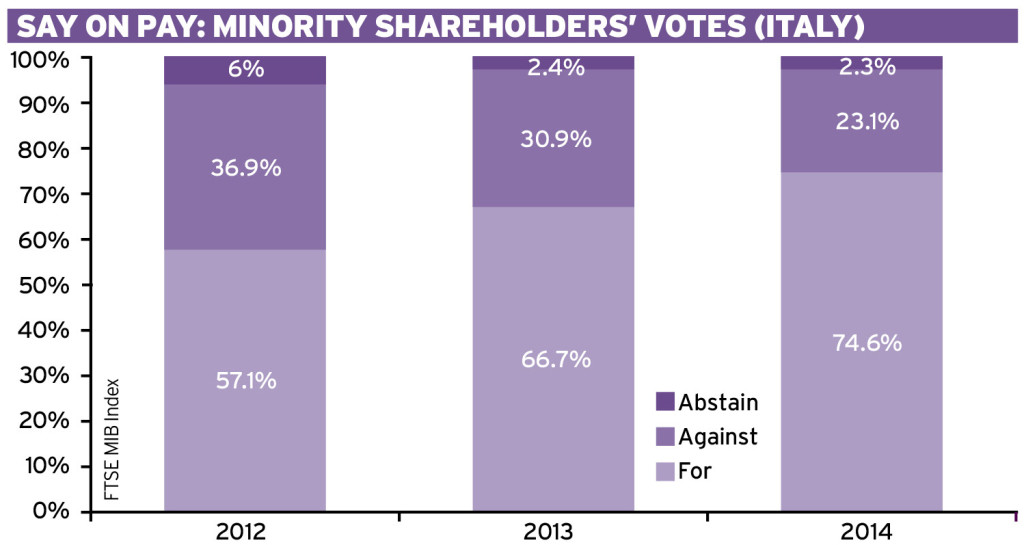 In the majority of cases, proxy advisors and institutional investors pointed out a deficit in information regarding the performance criteria, which allows the assignment of a variable component to remuneration. The absence of a clear benchmark to compare peer companies in the definition of total executive officer compensation is even more apparent.

Another recurring critique is the absence of the so-called clawback clause, which allows the recoup of compensation which has already been paid by the companies to executive directors. These mechanisms, together with the malus clauses, represent an important means of avoiding rewards for failure. Most remuneration schemes do not include deferral of short-term bonus payments and severance payment for executive officers could exceed 24 months of fixed salary. Even attributing discretional bonuses for achieving undefined, but strategic, objectives, is considered too arbitrary and thus potentially unaligned with the minority shareholders’ interests. In regard to long-term incentive plans, investors pointed out that the vesting period for long-term incentives is often annual instead of triennial, as prescribed by international best practices.

New provisions issued by the Italian Securities and Exchange Commission in July 2014 require that issuers disclose additional information upon termination of the mandate and/or contract of executive directors and general managers. More specifically, the information must include the amount and timing of payments, including those under non-competition or collective bargaining agreements and any deferral and/or ex-post adjustment mechanism. Companies must also demonstrate that termination payments comply with the current remuneration policy. 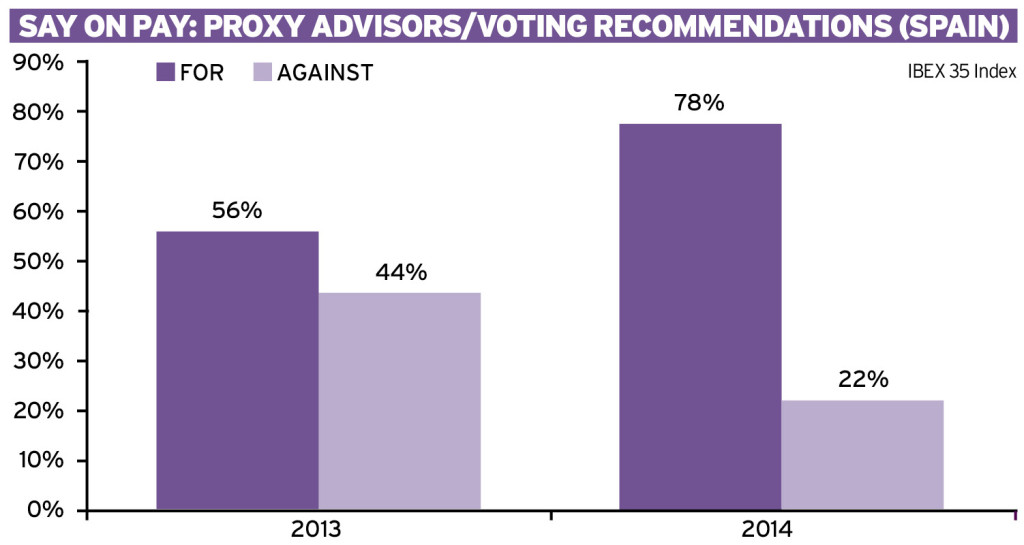 In 2014, the Spanish Securities and Exchange Commission issued an official template (Informe Anual de Retribución or IAR) intended to improve the key disclosure terms of executive contracts, including golden parachutes and other pay elements, such as insurance and pension benefits and (often unquantified) in-kind benefits.

A report recently issued by the same regulator revealed for some of the largest constituencies of IBEX a lack of disclosure on ex-post information, highlighting in certain cases low correlation between executive compensation awarded in 2013 and company performance. According to this study, IBEX companies showed CEO compensation weighted more towards fixed pay (55 per cent of total). Traditional metrics, such as operating results and net profit, have consistently been the dominant performance measures for short-term incentive plans. Only 25 per cent of these compensation schemes focus on qualitative targets. Market-based measures, such as Total Shareholder Return (TSR) and earning per share (EPS), are widely used for long-term incentive plans, especially when bonuses are awarded through financial instruments. Neither the Unified Code nor the Corporate Enterprises Act addresses clawback agreements or malus conditions, currently present in a number of other European markets. This could be the reason why many non-financial companies are not establishing provisions for clawback to recoup all or a portion of erroneously awarded remuneration.

Say on pay is not mandatory for French-listed companies. In fact, the annual advisory vote on executive remuneration was introduced from proxy season 2014 following a recommendation of the AFEP-MEDEF in the last version of its corporate governance code. As stated by the implementation guidelines of the code, in one-tier companies where chairman and CEO are not combined, there should be a separate say-on-pay proposal from other executive managers. For two-tiered board structures, the code recommends one resolution for the chairman of the management board and one for management board members. Most of CAC40 listed companies refer to the AFEP-MEDEF code and proposed an advisory vote on their executive remuneration at their 2014 general meetings.

Although the say on pay in France is seeking approval for the amount of fixed and variable elements of the compensation due, received or awarded during the previous fiscal year, investors and proxy advisors focus their analyses on the alignment of pay to performance rather than the amount of remuneration.

On average, shareholder support of say-on-pay resolutions submitted at CAC40 was relatively high, with an average support of 92 per cent of total votes cast. The institutional investors’ main concerns pertained to the lack of disclosure on performance metrics, the absence of bonus caps and ex-post information (retrospective disclosure on bonuses awarded and their correlation to executive performance).

However, it should be noted that during the 2014 proxy season, some institutional investors, in addition to leading proxy advisors, demonstrated that they would take a somewhat more lenient approach towards the French market (compared to other European countries, such as Spain and Italy) on these non-binding resolutions. A tougher stance on executive remuneration can thus be reasonably expected for the 2015 proxy season.

Although support for say-on-pay resolutions was relatively high, shareholders were more critical of other compensation-related resolutions, such as executive severance pay and retirement agreements. Similar concerns were raised when companies awarded discretional bonuses without explaining the rationale behind these exceptional payments.

The new European directive on Shareholders’ rights could significantly affect the current framework. The proposed draft gives shareholders the right to approve the remuneration policy through a binding vote at least every three years. In addition, shareholders will be asked to provide an annual advisory vote on the remuneration report that should include information explaining directors’ total compensation in the reporting year, and how the pay policy will be implemented in the current financial year. Among the most controversial aspects are those requesting companies to disclose the maximum amounts of total remuneration that can be awarded.

“Minority shareholders in these markets are often subject to the forceful influence of controlling shareholders, with a clear risk of expropriation”

The Israeli corporate governance framework is characterised by a high degree of ownership concentration with more than 60 per cent of companies controlled by families or other groups. In recent years, the government and regulators have attempted to increase the free float of listed companies. However, minorities, on average, still account for less than 50 per cent of share capital.

For this reason, significant changes, which are aimed at encouraging and supporting minority shareholders to become more involved in the corporate governance of companies, were made to the Israeli legal framework. The reforms regarding executive compensation were approved at the end of 2012 after a comprehensive and comparative analysis of principal international markets.

Among the provisions implemented in 2014, the new regulation for executive compensation should be emphasised. Israeli companies must now submit their remuneration policy at least every three years for approval by a majority of non-controlling and non-interested shareholders before implementation. The so called ‘say before pay’ rule is mandatory and may be binding or advisory, depending on the structure of the company.

A binding vote is requested only when there are three or more layers in the pyramidal structure of control. If the majority of the minority shareholders do not approve the resolution, the statement will be returned to the board, which may approve the policy in spite of the disapproval. In this case the decision to overlook the shareholders’ vote should be clearly motivated. However, during the last proxy season there have been only a few instances of a remuneration report receiving less than 70 per cent of favourable votes. Dissent votes were mainly concentrated on resolutions aiming at approving stock option plans.

The principal southern European and Middle Eastern markets have profoundly reformed executive compensation in recent years. Minority shareholders in these markets are often subject to the forceful influence of controlling shareholders, with a clear risk of expropriation.

The safeguards adopted by the Israeli model appear innovative in many respects, but an accurate analysis of their impact on companies’ remuneration policies can be assessed only in time. They do, however, represent a useful guide for European legislators who are tasked with defining the new directives regarding shareholders’ rights. In any case, shareholder involvement in the definition of management policy is destined to increase. Currently, it represents one of the most important tools for influencing management.

From its beginnings as a purely reputational and aesthetic factor, say on pay has become an integral part of companies’ risk and long-term strategy definition.