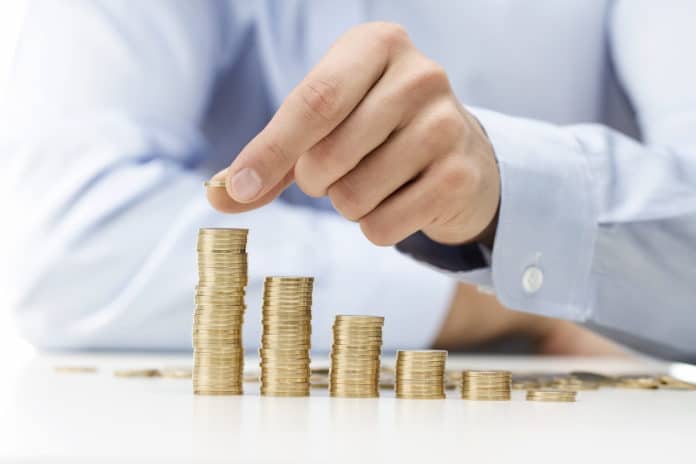 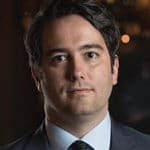 The obvious advantage is that of mitigating criticism and the potential opposition of shareholders to the adoption of the remuneration policy. But such defensive behaviour could cause the failure of the plan to address management toward the strategic goals of the company.

The design of an incentive plan should be based on a subtle balance of external influences (market, public opinion, employees, etc) and internal context of the company. The scandals and vicissitudes that have plagued several European companies should highlight the importance of including goals pertaining to the company culture and ethics dimension in the performance criteria of incentive plans. The future challenge will be to create measurable KPIs that provide the market with proof of constant alignment of management actions to the values that characterise the company’s business ethics and long-term vision.

The introduction of an advisory vote regarding compensation policies has achieved an important result in terms of moral suasion towards company management, succeeding in a natural push to change to international best practices.

Since 2012, after the implementation of the Shareholder Rights Directive, shareholders have been entitled to vote on a company’s policy for board members, general managers and executives with strategic responsibilities, at least with respect to the following year (forward looking), for all listed companies in Italy. To this extent, the say-on-pay provided more shareholder involvement in key decisions regarding compensation schemes increasing in time, transparency, accountability and linkage between executive pay and performance in the long term. In 2016, we note an average minority consensus substantially in line with the general meetings of Italian listed companies in 2015 (from 74.46 per cent to 75.30 per cent) – see Figure 1. 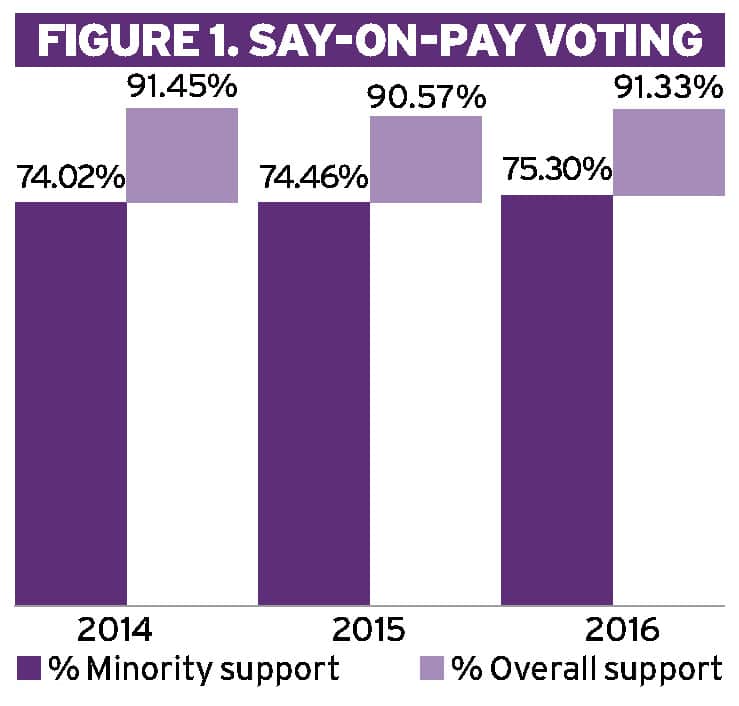 The data should also be interpreted in relation to the average level of negative recommendations expressed by proxy advisors for companies in the Italian market, which remain among the highest across the European countries that have implemented some form of say-on-pay. Concerning proxy advisors, on average, more than one third of compensation policies of Italian listed companies were rejected. Among the principal issues behind institutional dissent are the absence of disclosure relating to performance criteria and/or specific targets of incentive plans (short and/or long term), the power to assign discretional bonuses, the absence of a clawback clause and the presence of provisions of more than 24 months for CEOs executive severance compensation.

The more virtuous issuers have begun implementing direct engagement with institutional investors on executive compensation through HR functions, in time to gather the motions and transform them into proposals to change current compensation policies. In other cases, contact with shareholders has been more tactical and designed to mitigate the impact of the proxy advisors’ negative recommendations. In spite of this effort, we have noted a decrease in favourable votes toward compensation policies which has affected, in particular, 53.5 per cent of FTSE MIB companies, in some cases modestly (<10 percentage points), in others, by a decidedly more significant measure, plummeting into negativity and reaching a percentage of unfavourable votes higher than 50 per cent.

In 10 companies of the panel, institutional investors expressed significant dissent (>25 per cent) regarding compensation policies submitted to a vote, as they were characterised by different elements, which were regarded as being misaligned with best practices (e.g. high severance payments, entry bonuses, insufficient level of disclosure regarding objectives upon which incentive plans are based, presence of discretional bonuses).

In 2013, the French government discarded the possibility of implementing a say-on-pay vote by law and decided to entrust the issuers’ associations in introducing the framework for such a consultation. Following this decision, the AFEP-MEDEF Code introduced a provision, recommending that companies submit an annual advisory vote on any executive corporate officer compensation, received during and due for the fiscal year under review.

In particular, the code recommends one say-on-pay resolution for the chairman and chief executive officer and one say-on-pay proposal for the executive directors in the case of a one-tier board structure. For two-tiered boards, the code suggests one resolution for the chairman of the management board and one resolution for the other management board members. The results for say-on-pay in France for 2016, regarding CAC 40 companies, is generally in line with the results of the main European markets. On average, approximately 90 per cent of shareholders voted in favour of compensation policies. We must, however, underscore that in at least one case out of four, proxy advisors recommended against the policy, determining a large decrease of favourable votes. The commitment of numerous French companies to pursue a more determined alignment to international best practices has produced a net improvement compared to 2015 approval metrics. See Table One: say-on-pay voting in France (below).

We must, however, highlight that in at least 12 cases of CAC 40 companies, shareholder consensus was slightly higher than 65 per cent, indicating the persistence of several base issues, such as the absence of performance metrics attached to short-term compensation and the presence of discretionary bonuses. In some cases, the company failed to explain significant pay increases for executives that occurred during the previous fiscal year.

The French Macron Act, enacted in 2015, amended the minimum legal vesting and holding periods for share awards issued by French companies that can both be reduced from two years to one. In addition, the holding period can be avoided if there is a two-year vesting period. Some proxy advisors argued that a one-year vesting period cannot be considered a sufficient period during which performance for a long-term incentive plan can be measured. Consequently, we recorded an increase in negative recommendations from proxy advisors. As demonstrated in the following chart, the impact of these recommendations on institutional voting decisions was narrow and, in most cases, influenced by the deployment of engagement strategies. See Table Two (above): performance shares voting.

In accordance with the Good Governance Code and revised Capital Enterprise Act, companies must prepare and submit an annual remuneration report for advisory shareholder approval and submit, as a separate item, their remuneration policy to a binding vote at least once every three years. During the 2016 AGM season, the remuneration related proposals continued receiving negative voting recommendations. Proxy advisors are increasingly demanding clarifications and alignment with international best practices is increasingly expected.

For at least one third of IBEX35 companies, the proxy advisors opposed the remuneration policy proposals and among the 87 ‘against’ voting recommendations received by IBEX35 issuers, 20 of them (around 23 per cent of the total) were regarding remuneration-related proposals – see Figure 2: Proxy Advisor Recommendations. 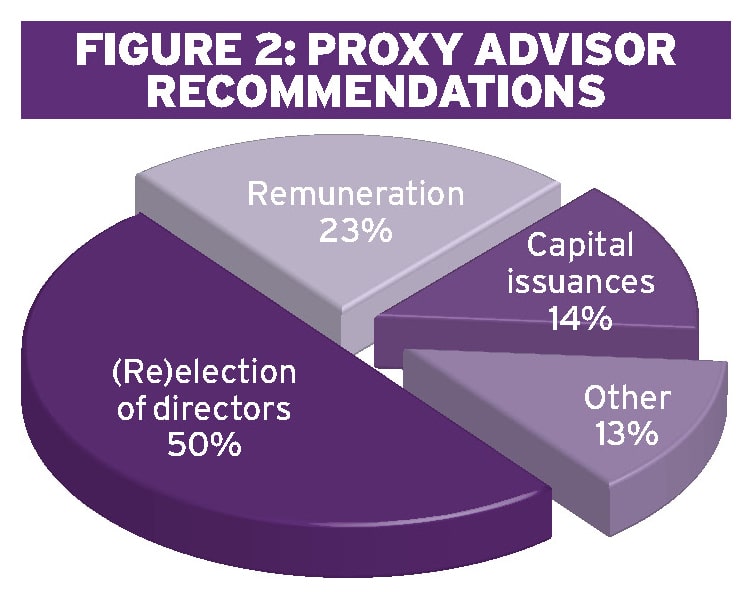 Among the companies that submitted remuneration policy to shareholder approval, the average support was equal to 89.6 per cent in 2016, in line with other European countries. Similar results were recorded for resolutions involving the remuneration report (90 per cent). Despite this fact, institutional investors indicated that long-term incentive plans are sometimes not subject to appropriate performance targets and therefore do not provide the necessary link between pay and performance for executives.

Concerns also have been raised over a lack of disclosure in several compensation areas, notably short-term performance targets and significant salary increases. In some cases, investors opposed the board’s discretion to grant termination benefits that could lead to excessive severance payments and the adoption of a non-transparent executive pension contribution scheme.

The ownership structure of Israeli-listed companies shows persistent high ownership concentration and limited contestability. This situation led the regulator to propose an innovative say-on-pay model, prescribing that in companies with three or more tiers of pyramidal structure, which spotlights a potential divergence between controlling shareholders and minorities, a majority vote of independent shareholders should be binding and not advisory. The last proxy season seems to confirm a slight increase of institutional shareholders’ dissent towards remuneration policy from 79 per cent approval in 2015 to 75 per cent in 2016.

The absence of a say-on-pay mechanism results in scarce oversight for shareholders on executive compensation. While the 2013 Hellenic Corporate Governance Code recommends Greek-listed companies provide an annual remuneration report within the corporate governance statement and disclose policies and principles of remuneration for executive directors, implementation of the code is on a voluntary basis and reports detailing company remuneration schemes are not always disclosed.

“External factors, such as institutional investors, proxy advisors and other stakeholders, have radically altered management incentives in recent years”

In the main Southern European markets, stark differences continue to exist in the spheres of executive compensation and say-on-pay. Several countries, such as Greece, fail to present any form of shareholder control over management, whereas in others, such as Italy and Spain, management must submit to intense scrutiny, both ex ante and ex post. The decrease in institutional investor dissent is certainly a positive factor. However, we must ask ourselves if the achievement of this status quo will determine a slackening in the transparency of remuneration practices of the most virtuous companies.

External factors, such as institutional investors, proxy advisors and other stakeholders, have radically altered management incentives in recent years, aligning it to objective and measurable performance criteria. Remuneration plans will be expected to account more and more for the ethical and cultural dimensions of the company, capable of guiding and incentivising management over the long term.

Fabio Bianconi is a Director at Morrow Sodali, a global leader in corporate governance consulting, shareholder and bondholder transactions and institutional investor relations. He is focusing on helping companies to enhance communications with their shareholders and third-party opinion-makers and to analyze their current governance practices in light of the current corporate governance landscape and their own business developments.

Prior to joining Morrow Sodali, Mr. Bianconi served as Head of Corporate Governance Advisory at Georgeson and corporate governance analyst for ISS Proxy Advisory Services. He has also served as researcher at Financial Times idc a leading international supplier of high quality, financial market and company information services to the finance, banking, corporate and government sectors. Fabio Bianconi has a degree in Political Science (summa cum laude) from the University of Urbino and received a Master in International Affairs and Finance. Bianconi’s native language is Italian. He is also fluent in English and French. Mr. Bianconi currently sits on the Business Ethics Committee at the International Corporate Governance Network.