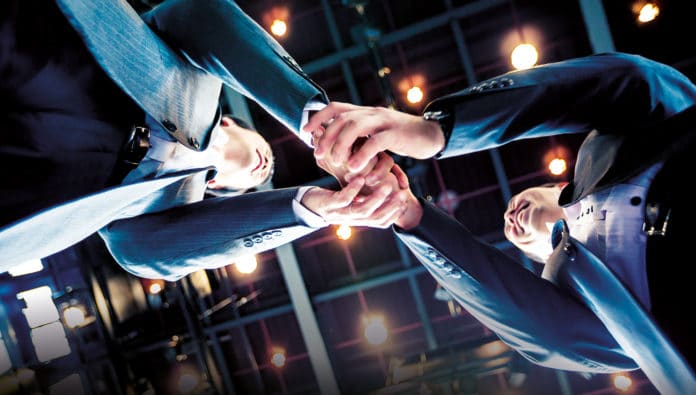 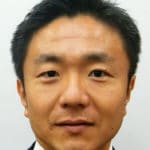 2018 marked the fifth anniversary of Japan’s initiatives on investor stewardship and corporate governance reforms, following the first council meeting to discuss its Stewardship Code in August 2013.

Over the past five years, the Japanese government has implemented a series of measures and investors and Japanese corporations have responded. More than 230 institutional investors have signed up to the Stewardship Code while approximately 90 per cent of companies listed on the Tokyo Stock Exchange reported that they complied with more than 90 per cent of the Corporate Governance Code’s principles. The stage has been set for Japan Inc. to change.

The primary purpose of the reform initiatives has been to promote sustainable growth of Japanese companies and to increase corporate value. This is a unique aspect of the reforms in Japan as the corporate governance and stewardship reforms are often implemented against a background of corporate scandals. Consequently, we should use financial outcomes to evaluate the progress of reforms. As far as financial achievements are concerned, the reform initiatives have not yet brought about as financially significant changes as originally expected in these five years.

We look at how corporates have changed and how the market has evaluated this outcome. If we look at the median of constituent companies of the TOPIX 1000 Index, return on equity (ROE) improved but only slightly, from 8.3 per cent to 9.4 per cent over the five-year time horizon. In deconstructing ROE, whereas the profit margin has improved, both asset turnover and asset to equity declined, offsetting a positive impact of profit margin improvement (see Table 1).

The market index of Tokyo Stock Exchange rose 39 per cent in the five years to August 2018, which is equal to an annualised return of 6.8 per cent. The percentage of TOPIX 1000 companies that trade below book value decreased to 30 per cent from 42 per cent during the same period. These figures are respectable and encouraging but might not be compelling.

This is not just our view; the government appears to be on the same page. A council under the Financial Services Agency started the discussion with a view to the revision of the Corporate Governance Code in October 2017 and examined the progress of corporate governance reforms. The council had five meetings and eventually came up with five points that should be taken into account in the revision.[1] Based on the proposals by the council, Financial Services Agency and Tokyo Stock Exchange, the Corporate Governance Code was revised in June 2018.

In the document where the council proposed the revision, they made it clear that further progress had yet to be made in corporate governance reform. Among the five points taken into account in the revision of the Corporate Governance Code, four points are relevant here:

Each of these points addresses challenges that are likely to be hindering Japanese corporates in their efforts to improve financial performance. The council’s comments on each point are summarised (in bold) below.

Management decisions in response to changes in the business environment

“Many companies are not making management decisions decisively in response to changes in the business environment… The reviewing of business portfolios is not necessarily sufficient at Japanese companies, because management still does not adequately recognise a company’s cost of capital.”

According to a survey by the Life Insurance Association of Japan, to which 581 companies and 116 institutional investors responded, 73.3 per cent of investor respondents expect companies to concentrate on their core competence, i.e. to re-examine and restructure their business portfolio in order to increase capital efficiency.[2] In contrast, only 36.5 per cent of company respondents consider concentration on core competence as an important strategic option to achieve higher capital efficiency.

“Strategic and systematic investments in fixed assets, R&D and human resources are important for companies to generate sustainable growth and increase corporate value over the mid to long term… It is also important to conduct appropriate financial management, which is consistent with investment strategies and recognises a company’s cost of capital.”

The same survey by the Life Insurance Association of Japan shows that about 70 per cent of investors consider the level of cash on companies’ balance sheets as excessively high while 60 per cent of companies consider it appropriate. For TOPIX 1000 companies, cash and short-term investments on the balance sheet grew 60 per cent over the past five years.

CEO appointment/dismissal & responsibilities of the board

As an analysis by FSA, which is represented in Figure 1 (below), shows, there appears to be a modest correlation between cross-shareholdings as a percentage of net assets and ROE.

“In order for a board to be truly effective, the chairman needs to nurture conditions that allow non-executive directors and board committees to function in a way that promotes the long-term interests of a company”

With these concerns in mind, the Financial Services Agency not only revised the Corporate Governance Code but also came up with Guidelines for Investor and Company Engagement.[3]

These illustrate ‘agenda items for engagement on which institutional investors and companies are expected to focus’. It may appear odd that a government organisation sets discussion items for companies and investors. But, this is indicative of how seriously the Financial Services Agency takes this ‘cost of capital’ problem and considers it as the key for Japan Inc. to revive.

Next, we present our observations around the 2018 June AGM season so that readers can understand on-the-ground actions by investors and corporations. The following three points are worth highlighting: higher diversity on the board, increase in shareholder proposals and impact of corporate scandals on investors’ voting.

The caveat however is that none of those proposals was approved despite the fact that shareholders submitted 42 proposals – a record-high. Shareholder proposals can be an effective way to make the shareholders’ view known to companies and put pressure on them, although it might not be able to trigger radical corporate changes by itself.

There have been a series of corporate scandals at Japanese companies in recent years, starting from Kobe Steel. At many of those companies that experienced corporate scandals, top management received less support for their re-election. For example, the chairman of Suruga Bank received about 20 per cent less support in 2018 after it was revealed that the bank was involved in a lending scandal (See Figure 2, below).

The changes and developments in 2018, whether or not initiated by the government, investors or corporations, have not led to improved near-term financial performance. However, they are green shoots definitely setting a constructive grounds for better performance by companies and for more effective investor stewardship.

Having said that, some investors may be frustrated by the slow progress at Japanese companies and many companies are also frustrated by the formality of investors. While it is understandable, it has only been five years since Japan started making a series of efforts to improve. We however remember that these five years compare to 30 years when the country was struggling with an economy yielding minimal growth and declining stock markets.

We, Governance for Owners Japan, have been implementing investor stewardship for institutional investors for 11 years. There is no doubt that the environment of investor engagement has never been more favourable. Given our experience, we are confident that investor stewardship works in Japan and investor engagement is beneficial to both shareholders and companies. We have tracked our engagement portfolio since 2009 when we started engaging with companies on behalf of our clients. This portfolio returns more than 40 per cent alpha over the Tokyo Stock Exchange market index in eight years.[4]

Therefore, the benefit here is not formalistic corporate governance improvement, but sustainable value creation and stronger stock performance. This shows that investor stewardship works and adds value even in Japanese markets, although progress may take longer than elsewhere.

At the beginning of this article, as symbolistic metrics, we presented ROE from 2014 to 2018 and its limited improvement. We present more encouraging statistics to end this article. In 2018, TOPIX 1000 companies returned more than 30 per cent of their operating cash flow to shareholders via dividends and share buybacks for the first time in these five years. As a result, while the absolute amount of cash continues to increase, cash to total assets ratio declined for the first time. Capital discipline seems to be emerging (see Figures 3 and 4). 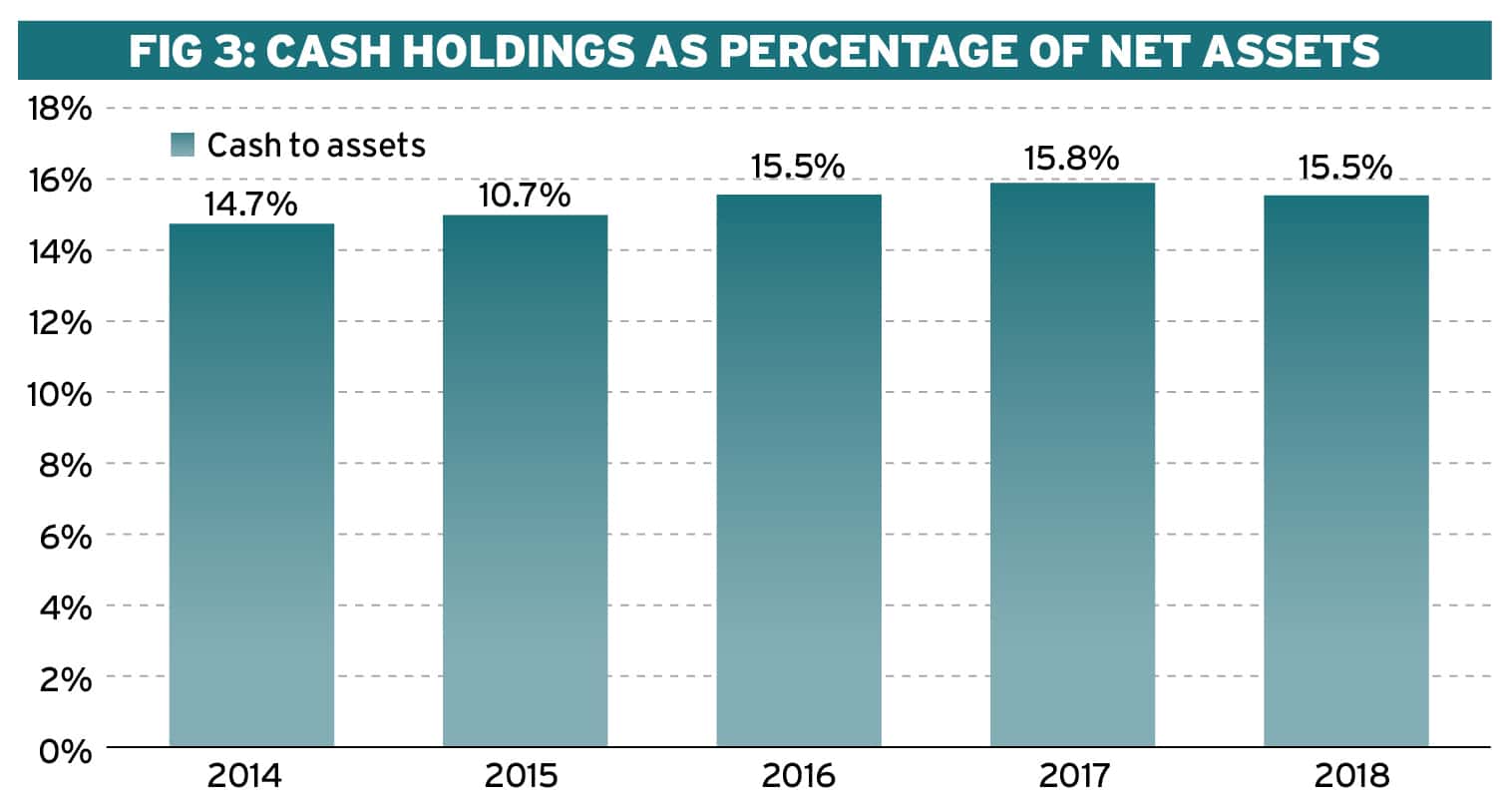 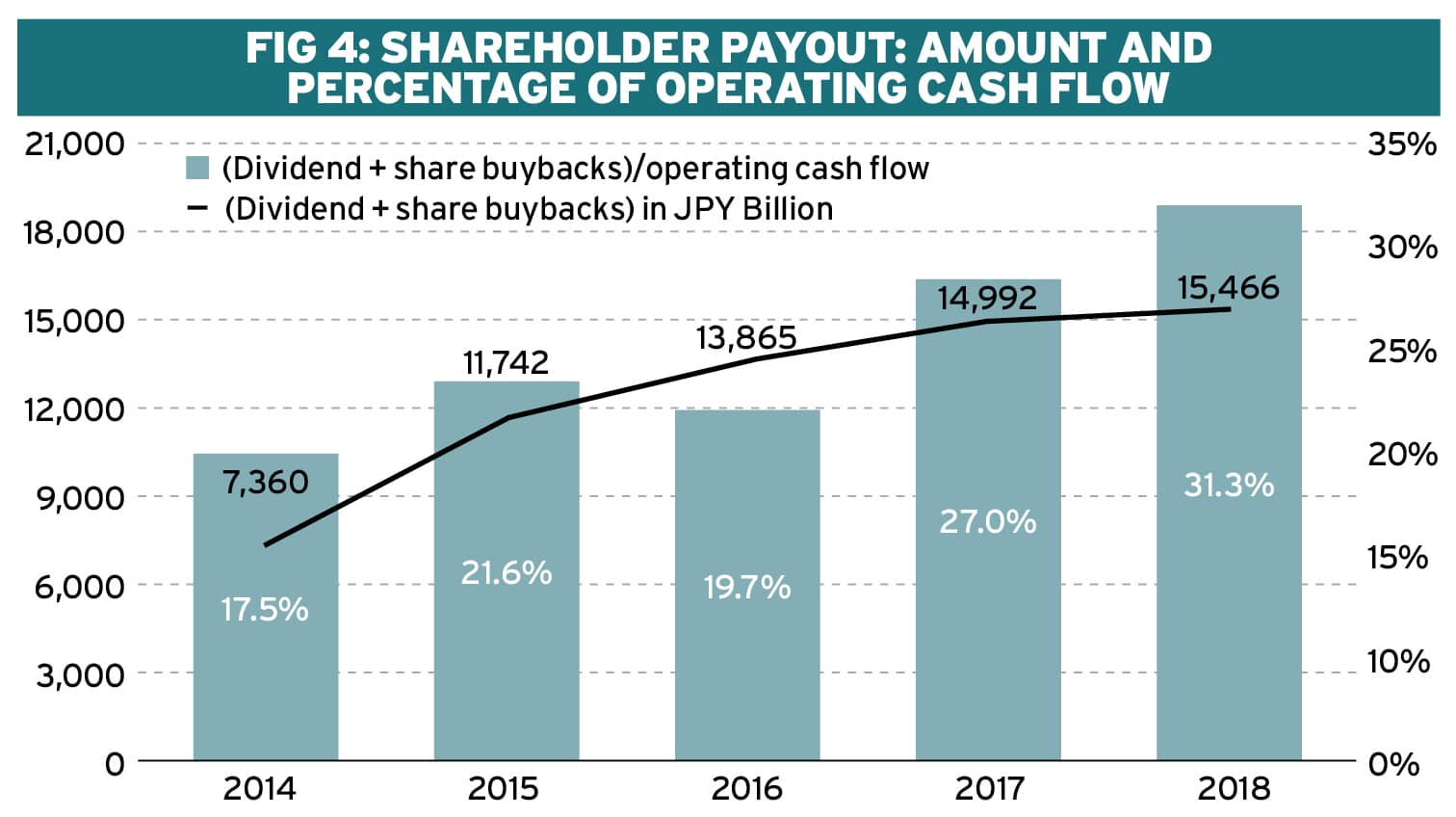 This would not have happened without investor stewardship and corporate governance reform initiatives. We believe that we are approaching a tipping point for Japan Inc. when the financial advances of these initiatives over the last five years will become obvious.

Yoshi joined GO Japan in October 2009 and is Head of Responsible Investment, GO Japan. He leads engagement programmes for clients under Japan Engagement Consortium. Prior to joining GO Japan, Yoshi was a sell-side analyst at Goldman Sachs covering the Japanese banking sector. He also worked at the Financial Services Agency in Tokyo. He holds a Masters in Finance with distinction from London Business School as well as a Bachelor of Law from University of Tokyo. Yoshi is one of contributing authors to “21st Century Engagement” by BlackRock and Ceres.”

1.The whole discussions can be found at https://www.fsa.go.jp/en/refer/councils/follow-up/index.html. It is a standing council and the website shows every council meeting so far. However, the ones specifically relevant to the revision of the Corporate Governance Code are the eleventh to the fifteenth.

4.A chart on page 22 of https://goinvestmentpartners.com/wp-content/uploads/2018/08/Stewardship_Code_English.pdf shows the stats 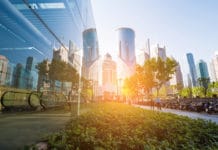 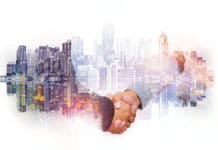