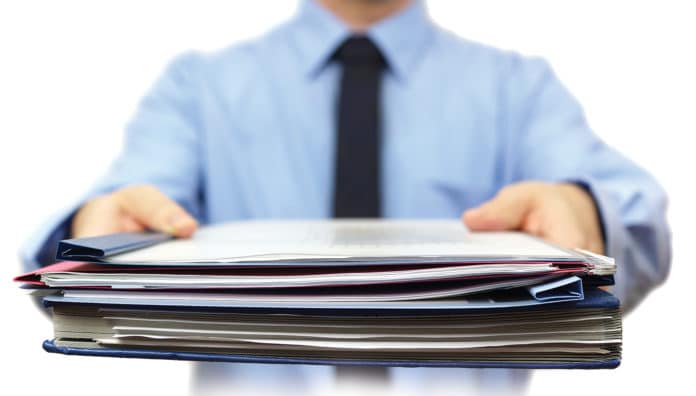 By Harm van Esch & Justus O’Brien – Harm leads the European Board Services Practice and Justus is Co-leader of the Board and CEO Advisory Group, Russell Reynolds Associates

A regularly reviewed, timely, transparent and structured succession plan is essential for success – the cost of a poor CEO succession process can be detrimental to a company’s financial stability and reputation.

Russell Reynolds research has shown that companies that have experienced forced or unplanned CEO turnover forego an average of $1.8billion in shareholder value. However, on the upside, when properly planned and thoughtfully executed, CEO succession can enable organisations to envision new opportunities for growth, align the development of the senior management team with the strategic needs of the company and, ultimately, ensure the continued momentum of the organisation, despite considerable change. A smooth process requires the absolute focus and prioritisation of the topic on the boardroom agenda.

What does the ideal CEO succession process look like?

The ideal process is not always possible. Ultimately, even if everything is done right, people are unpredictable and this has the ability to derail the process and destroy value. CEO succession can be fraught with hidden risks and challenging dynamics, and in the majority of cases, it is far from ideal. Consequently, focussing the board on the following key points will help organisations bring a degree of order to a challenging process.

Create a culture of succession

Creating a culture where the importance of a rigorous succession process is baked into the principles of the company is integral to a successful outcome. This will enable the board to start talking about CEO succession from day one of the current CEO, thereby allowing the process to be given the time that it needs to be impactful. Furthermore, a culture of succession allows the process to be transparent and inclusive, with all key stakeholders engaged and playing their part. 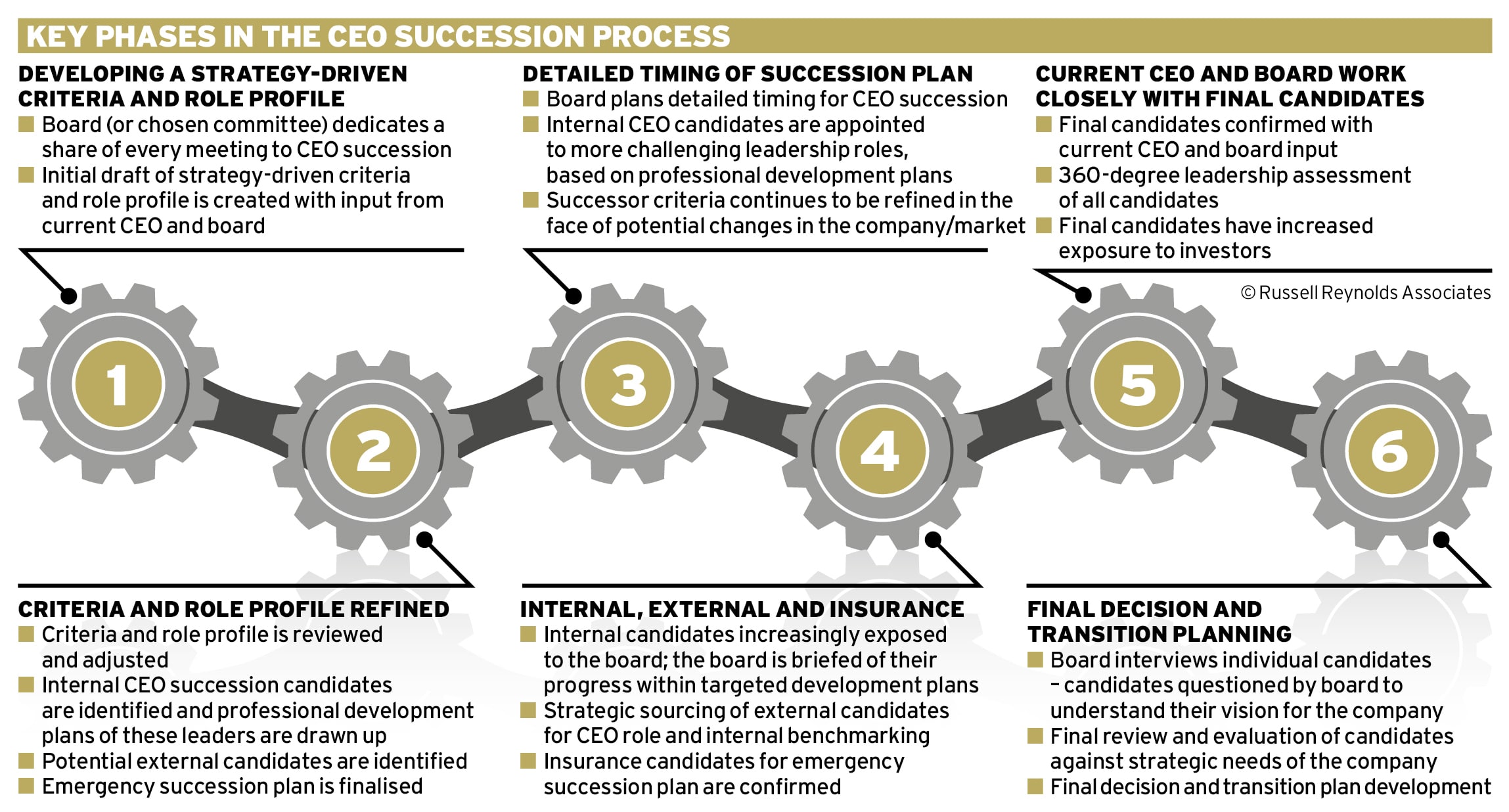 A partnership between the board and CEO

A successful process must include both the board and current CEO in partnership. The chairman and board are ultimately responsible for the process and setting the objectives. However, the CEO plays a crucial role in developing the potential internal successors through professional guidance and giving them opportunities to prove themselves. Without clear and unambiguous roles between the board and CEO, the process may resort to being entirely ‘board-led’, which would result in a loss of the key contribution that the current CEO plays in the process. This relates to the importance of the board creating a culture of succession, where open dialogue between the board and CEO on the process of succession allows the topic to be actively approached and given the due time that it deserves.

Developing a strategy-driven criteria and role profile is integral to the process. Ideally, the entire board, together with the current CEO, should work to design a clear and structured role brief. The board and current CEO must converge in defining what is needed in a clear and strategic context. The current CEO’s first-hand experience provides an invaluable contribution to what is needed in a future CEO, while the board can provide a more objective perspective, which can eliminate any potential favouritism or bias.

The company should begin by examining its strategy over a five to 10-year time period, factoring in the impact of various scenarios, such as how the business will be affected by challenges, including the continuing globalisation of supply chains, customers, competitors and investors, or the risks and opportunities brought by changing climate and global health conditions.

Looking at the impact of broad trends, such as these, helps ensure that the company’s next leader will have the capabilities and experience necessary to respond to complex events across numerous fronts. The board then distils these considerations into a set of required capabilities. It is key to note that the role brief is a living document and must be constantly reviewed and adjusted in the face of changing circumstances.

Having a clear and structured role profile that is agreed upon by all key stakeholders will allow the company to measure internal and external potential CEO candidates, against the same fair and objective process. Candidate management of internal, external and ‘insurance’ contenders is key to a successful outcome.

“The current CEO’s first-hand experience provides an invaluable contribution to what is needed in a future CEO, while the board can provide a more objective perspective, which can eliminate any potential favouritism or bias”

Uncovering the internal candidates early will allow the company to groom them and direct their careers more effectively. The CEO is ultimately responsible for the professional development of the potential internal successors. The development plan should be designed so that they are exposed to multiple aspects of the business and given responsibilities for key initiatives – such as overseeing entry into a new geographic region or the integration of an acquisition – that will mirror the sort of complex challenges they would have to face as CEO. The current CEO’s effective coordination of this will give the board an opportunity to evaluate their performance. To fully achieve this, the board should be regularly briefed on the internal candidate’s progress and given exposure to the internal candidates’ directly through board presentations, field observations and site visits. This will allow the current CEO and board to address any potential concerns, which might result in revisions to the leadership development plans of each candidate.

Uncovering the internal candidate pipeline early will also allow the current CEO and board to realise if there are no internal candidates that align with the desired role profile. In that case, the board may decide to bolster the talent pipeline by recruiting from the outside. However, this requires advance planning as bringing in a senior executive who could potentially step into the CEO role typically requires a three-year lead time so that the candidate will have fully been absorbed into the firm’s culture prior to the transition.

Managing internal candidates requires transparency and creating a culture of succession within the company will allow this. All too often, the CEO and board do not know enough about what is on the minds of these executives and this can lead to mistrust of the process and, in the worst circumstances, the loss of key potential successors. One of the most important ways to combat this is to ensure an open line of communication between the board, current CEO and internal candidates.

Strategic sourcing of candidates in the market will allow the board to track potential external candidates’ careers in order to make use of the right timing. An awareness of potential successors’ career direction and key milestones will ensure that the board approaches these executives at the right time, should the company decide to recruit externally. Furthermore, uncovering the key executives in the market is vital to ensuring that the company’s internal candidates are competitive with the rest of the market. This will ensure the company is choosing the best CEO available, rather than merely the best choice from within its own ranks.

The board must have a contingency plan should the current CEO suddenly depart. Whether this be a board member that could step down and become interim CEO or one of the internal candidates that could step up to the role sooner than expected, having an insurance candidate is vital to the process and gives all key stakeholders a level of comfort in the process.

Once the final candidate has been selected, it is critical that the board develops a thorough transition plan so that the new CEO has the benefit of a strong start. The outgoing and incoming CEOs should meet frequently for in-depth discussions regarding operating styles, expectations of the board and other senior executives, as well as other stakeholders, such as investors, creditors, customers, analysts and regulators. Following this, the incoming CEO should be introduced to the company’s stakeholders in a series of informal information gathering sessions. This will allow the incoming CEO to build the support and trust of various key players.

Developing a written transition plan, led by the board but with the involvement and support of the senior management team, allows for the orderly transition of roles and responsibilities. The plan must be effectively communicated internally and externally to project a sense of stability.

Crucially, the board must make key steps to strengthen the relationship between themselves and the new CEO. Even if the new CEO is known to the board, it is important that they begin to relate to him or her in the new role through a series of one-to-one meetings. Developing a trusting relationship between the board and CEO is critical to the future success of the company, as well as enabling another CEO succession to begin on day one.

To undergo a smooth CEO succession process, timing is key. This will allow the board to engage all the relevant stakeholders in the process, ensuring their full support, active contribution and ultimate satisfaction. Furthermore, starting ‘on time’ allows the board to be more creative and consider new and perhaps ‘non-traditional’ ideas, thereby encouraging greater diversity of the candidates in the process, whether that be inherent diversity or diversity of thought.

If a company runs out of time, these important factors tend to be driven out by what is more urgent. The transition from one CEO to another is a critical period in a company’s history. A timely, properly designed and executed succession plan is at the centre of any successful transition, and it is the board’s ultimate responsibility to ensure that this happens. 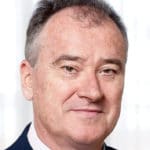 Harm van Esch, who is based in Amsterdam, is the leader of the firm’s European Board Services Practice. He focuses on board advisory services at multinational companies across Europe. Harm has more than 16 years of board and executive search consulting experience and is also active in executive assignments in the consumer and industrial markets. 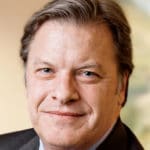 Justus O’Brien is co-leader of the firm’s Board and CEO Advisory Group, based in the New York office. He advises corporate boards and CEOs in corporate governance, CEO and board succession planning, board and committee evaluations, activism, digital transformation, diversity and governance benchmarking. Justus has decades of executive search experience advising global companies.

Reframing the role of an interim CEO

The team effect in CEO succession