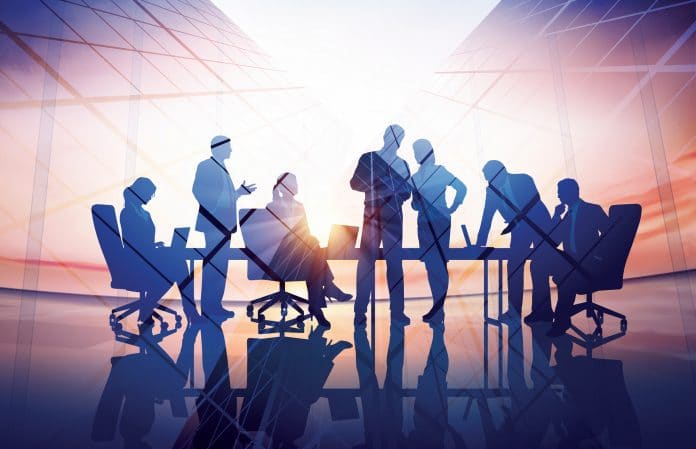 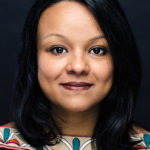 While much attention has focussed on the activities of a board’s remuneration, audit and risk committees, the nomination committee is emerging from the shadows as more companies recognise their potential.

Despite being regarded as the poor relation, of the main board committees, the nomination committee is increasingly called upon to take a more significant role in helping achieve the right balance, knowledge, skills and attributes in order for the board and its committees to operate effectively.¹

The role of the nomination committee

Traditionally nomination committees may have been more reactive than other committees – perhaps meeting only when a director was leaving the board for the purpose of identifying a replacement. Also unlike the audit and remuneration committees, there isn’t a natural reporting or regulatory cycle leading to a wide variety of approaches to the committee’s function.

In recent times, however, there has been a rethink on the role that this committee can play and how it can be improved. This is especially so due to relatively short tenures – on average non-executive directors and CEOs are on boards for about 5 years.

Today’s nomination committees therefore need to think broadly when directors step off the board – whether planned or unexpectedly – what the departure may mean for the board composition now and going forward and how best to communicate to investors about current and future plans.

Although there is no natural regulatory trigger for nomination committee activity, its work should be co-ordinated with existing board discussions about company strategy, board evaluations and succession planning. Staff and skills retention are a business imperative and yet many executive pipelines have tended to be inadequate when it comes to providing a sustainable pool of talent.

Leading FTSE 350 companies are increasingly planning ahead for both emergency and ‘steady state’ situations, to prepare for unexpected board changes and to identify potential candidates several years out from taking on a board role.

A new joint report by EY and ICSA: The Governance Institute, “The nomination committee- coming out of the shadows” outlines findings and views gathered from a series of roundtable discussion with board chairman, nomination committee chairs and members, and company secretaries from over 40 listed companies predominantly in the FTSE 350.²

Insight from these discussions has shone a light on some of the current practices and behaviours of nomination committees, with many of the representatives indicating their companies were expanding the role of their nomination committee, as well as adopting a more professional approach to the recruitment and selection of candidates.

“Leading FTSE 350 companies are increasingly planning ahead for both emergency and ‘steady state’ situations, to prepare for unexpected board changes and to identify potential candidates several years out from taking on a board role”

Three main ways that many companies are looking or should be looking at improving the way their nomination committees operate have been identified.

1) Looking deeper into the company to identify and help develop its future leaders
While talent development remains primarily the responsibility of management, boards have a duty to secure the long-term health of the company. There is a growing view that the board, through the nomination committee, has to take some responsibility for ensuring not only that potential future board members are being identified and developed, but also that there is adequate ‘bench strength’ in management to run key parts of the company with some nomination committees considering the top 50-200 talent. The nomination committee needs to be satisfied that there is a pipeline of talent that will sustain the company in the long term. In doing this, it should also gain some visibility on whether the talent pipeline has future leaders who will instil and exemplify a company’s culture or bring about necessary change.

There are key points that boards and nomination committees should consider

According to the FT–ICSA Boardroom Bellwether report (a twice-yearly survey of FTSE 350 companies that seeks to gauge the sentiment inside UK boardrooms), 58 per cent of company secretaries said their executive pipeline has a sustainable pool of talent.³

Companies, therefore, need to consider the impact on their board and to look at a wider pool of candidates in order to identify people with the skills needed to meet the challenges they face. This reflects both a growing awareness of the benefits of, and demand for, more diverse boards, and changes in the skill sets needed, such as a greater focus on digital technology.

Gender, ethnic and geographical diversity is also important for businesses operating across many different markets, leading to companies looking beyond the ‘usual suspects’ to find people with different experiences and backgrounds.

Points for boards and nomination committees to consider:

Leading boards now look much further into the future when developing their long-term strategies for the business with nomination committees expected to develop a clear view of the needs of the business over a range of time horizons, informed by the company’s strategy, and plan accordingly. 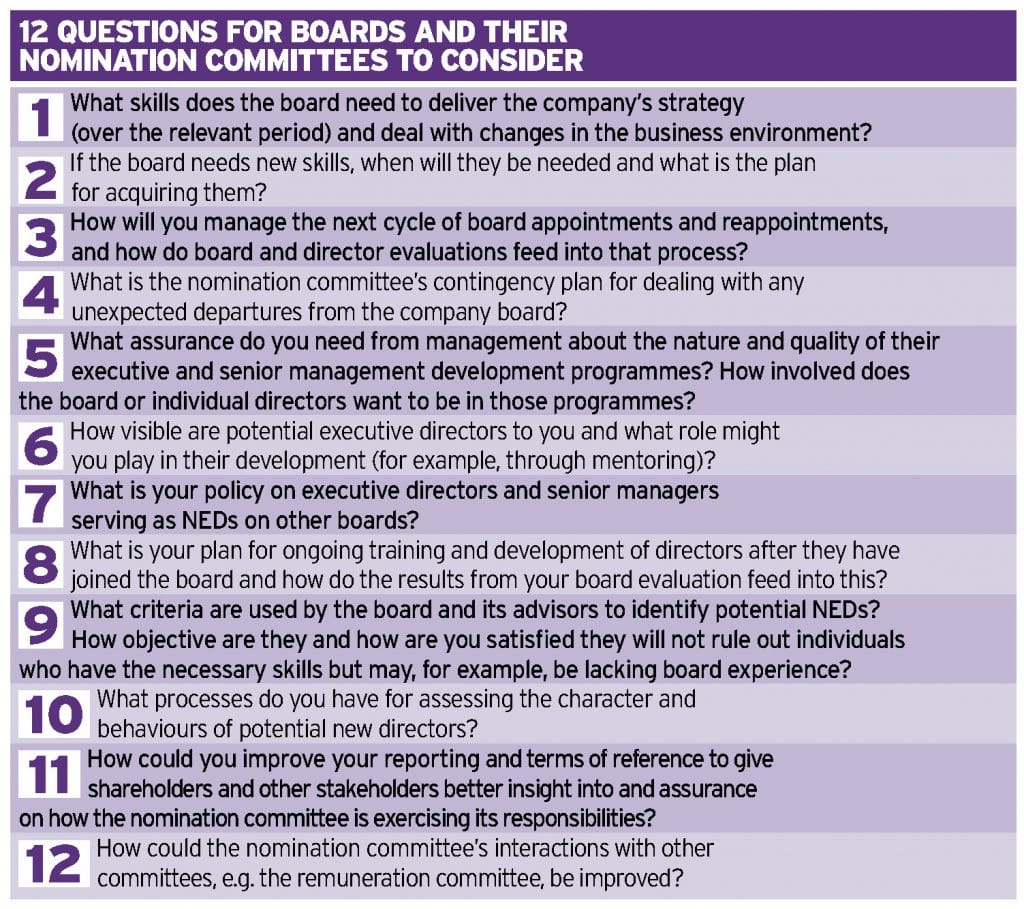 As well as keeping on top of emerging talent challenges in an ever-evolving business environment, more predictable succession planning is also a vital part of the nomination committee’s role, such as understanding when individuals are due to leave the board.

While traditionally NEDs could be appointed for three terms of three years, with many completing the full nine years, frequently NEDs have chosen to leave the board earlier, perhaps after six years.

Points for boards and nomination committees to consider:

“The nomination committee plays a crucial role in the effective functioning of boards; linking the board’s director recruitment, selection and succession planning processes to the company’s strategic goals”

Good governance is about boards continually asking the right questions of themselves and of management in order to gain assurance on the performance and behaviours of the business. The nomination committee plays a crucial role in the effective functioning of boards by linking the board’s director recruitment, selection and succession planning processes to the company’s strategic goals.

“The nomination committee plays a crucial role in the effective functioning of boards; linking the board’s director recruitment, selection and succession planning processes to the company’s strategic goals”

It is time for boards to better utilise the nomination committee, take a more proactive role and bring it out of the shadows.

Given 63 per cent of listed companies cite people-related risks, including staff and skills retention, as one of their principal risks4, making it the second most common principal risk disclosed by boards, it is encouraging that we are starting to see a shift. A highly effective board is essential if companies are to produce sustainable returns for their shareholders, stakeholders and wider society.

About the Author:
Mala Shah-Coulon is an executive director in EY’s corporate governance team. 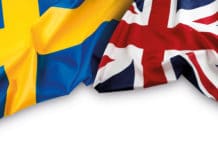 Nomination committees in Sweden and the UK