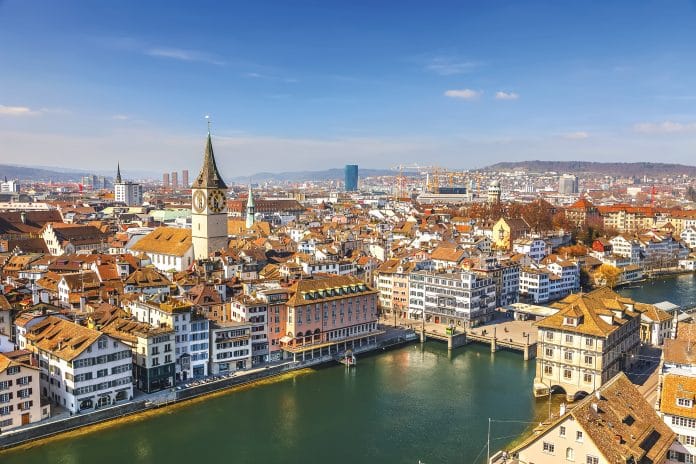 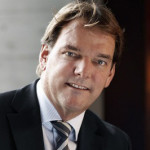 By Dr. Robert W. Kuipers – Partner in Leader Reward at PricewaterhouseCoopers in Zurich

Following the release of the ‘Ordinance against Excessive Remuneration in Listed Companies Limited by Shares’ (ERCO), Switzerland is awaiting the first annual general meeting (AGM) season that will see actual binding say-on-pay votes by shareholders at listed companies. In these votes, shareholders will vote, either prospectively or retrospectively, on actual amounts of compensation.

This constitutes a significant change from the system of (voluntary) advisory votes on remuneration reports that many companies had adopted. The public also remains highly sensitive to the issue of compensation packages that some see as excessive. As companies are preparing for this AGM season, it is useful to consider the status quo as well as trends in executive compensation in Switzerland.

PricewaterhouseCoopers (PwC) each year conducts a detailed analysis of executive compensation in Switzerland’s largest 100 public corporations. A number of salient facts emerged from this year’s Insights 2014 study. In the seven years under consideration, median non-executive chairman pay has increased in both Swiss Market Index (SMI) companies (the largest 20) and SMIM companies (the 28 next largest): by 16.2 per cent from slightly below CHF 1 million to slightly above CHF 1.1 million in SMI companies and by 41.6 per cent from CHF 384,327 to CHF 544,000 in SMIM companies.

However, last year, chairman pay in SMIM companies saw a decline by 7.9 per cent. By contrast, in the same period, median CEO pay has decreased in SMI companies by 17.6 per cent from CHF 8.1 million to CHF 6.7 million in SMI companies. The highest compensation values have decreased substantially over the years. Interestingly, though, CEO pay in SMIM companies increased – due to a strong increase in 2013 – from 2007 to 2014 by 12.4 per cent from CHF 2.8 million to CHF 3.2 million. This outcome is partially driven by an unusually large number of CEO turnovers and the corresponding additional payments to incoming CEOs. The median CEO of a small-cap company received roughly CHF 1.2m in 2013. As such, median CEO compensation in these firms is now slightly above 2007 levels.

Main Trends In The Composition Of Pay

The composition of CEO pay fluctuates significantly, but some broad patterns can be seen in the graphs (below). These figures show average compensation values. Medians, as reported above, are in principle preferable for small samples sizes, but the average values allow a presentation also of the composition of the average compensation package. In SMI companies, since 2007, base salary has never made up more than 30 per cent of total pay, long-term incentives (LTI) never less than 40 per cent (and they reach close to or exceed 50 per cent in some years). In SMIM companies, by contrast, throughout the sample period (except in 2007), base salary has not made up less than 30 per cent of total pay, while the LTI did not account for more than 40 per cent of total pay (and falls below 30 per cent in some years). The cash bonus and other payments are of approximately equal importance in the two samples. Small-cap CEOs tend to receive a larger portion of base salary and a smaller portion of equity-based compensation than their counterparts in SMI and SMIM firms. 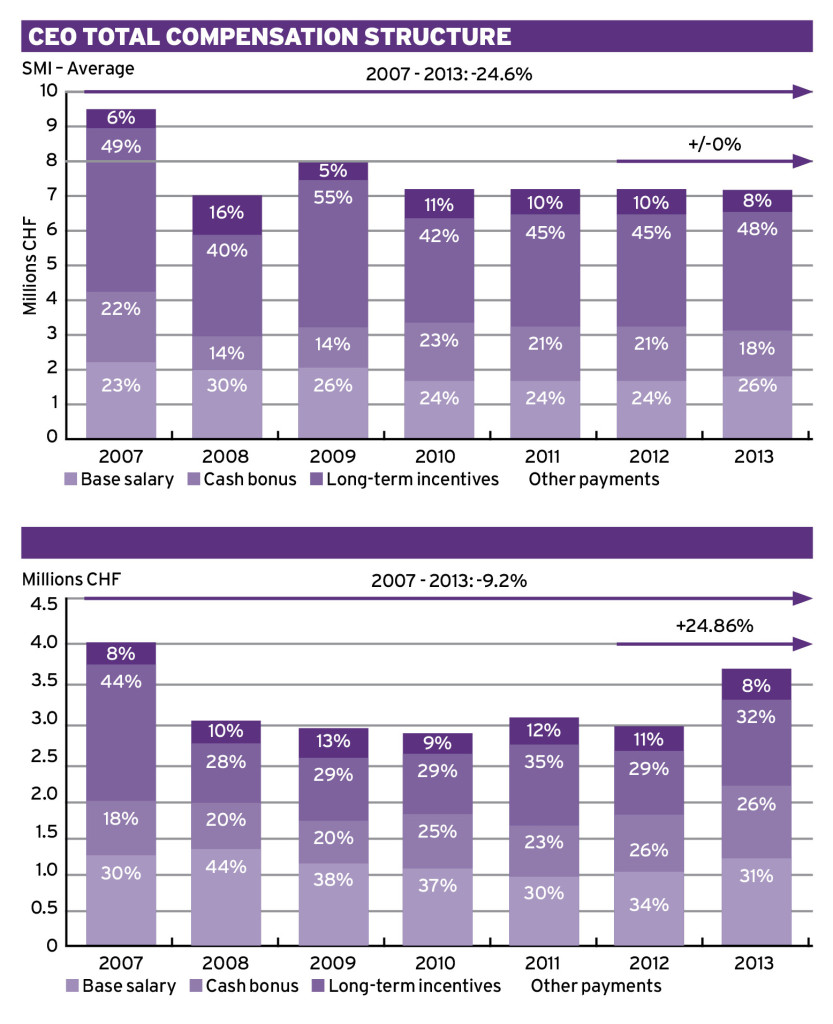 Say-On-Pay Procedures: One Practice Does Not Fit All

Many, but by far not all listed companies have revised their Articles of Association in the 2014 proxy season. This includes in particular choices with regard to the say-on-pay regime but also several other aspects of corporate governance. The main observation that can be made from companies’ responses to the new regulatory setting is that ‘one practice does not fit all’. Shareholders, by approving the changed articles, have made a conscious choice whether they want to vote prospectively (thus approving maximum compensation amounts for the following year) or retrospectively, or with a mixture of systems. Depending on the system that has been chosen, companies will need to provide different types of disclosure. For example, in a purely prospective system, shareholders and proxy advisors will tend to request more information on the workings of the compensation system, including for example, details on vesting conditions. It remains to be seen what the appropriate level of disclosure will be.

“With increasing importance on transparency, many companies are considering the switch to simpler compensation systems”

Independent of the specific voting mechanism, shareholders will also continually assess whether the proposed compensation amounts are commensurate with the performance delivered. Importantly, companies will need to clearly disclose whether compensation proposed for a shareholder vote is a variable reward for past performance, or whether it is meant primarily as an incentive for future performance.

First, the ratio of executive total compensation to earnings before interest, tax, depreciation and amortisation (EBITDA) is approximately constant over time. This means that, in aggregate, when profits vary, total top management pay varies in the same direction.

Second, the data suggest a statistically significant but economically not very strong relationship between performance and variable pay of CEOs.

Fifth, SMI, SMIM, and small-cap CEOs participate in shareholder wealth creation (and reduction) due to their equity holdings. A change in shareholder wealth of CHF 1,000 is associated with a change in CEO wealth of CHF 0.2, CHF 0.6, and CHF 1 for the median CEO in each of these groups of firms, respectively. We observe a tendency towards more shareholding requirements, which will make executives and board members participate with their equity holdings in future stock market developments.

With the importance of the transparency of compensation systems increasing, some companies are considering the switch to simpler, rather than more complicated compensation systems. This seems to be a reasonable choice, in the light of the difficulties entailed in calibrating and communicating complex systems.

At the same time, it continues to be the responsibility of the board of directors to develop a compensation system that fits with the current and future needs of the specific company – boilerplate solutions are likely to be lead to suboptimal outcomes. The board of directors should not be afraid to engage with their major shareholders and should also be aware of the key differences in policies and processes of proxy advisors. Open dialogue, pro-active communication, and stakeholder engagement are essential for fostering the long-term positive development of companies.

Robert W. Kuipers is a Partner at PwC in Zurich. He is the leader of the Reward Network of Switzerland and a member of the PwC Global Reward Leadership Team. He has over 20 years of working experience in the field of human resource advisory, specialising in reward and total compensation structuring and design. Mr Kuipers has a Masters in Business Administration and Economics, University of Zurich and holds a Doctor’s degree from the University of Basel.