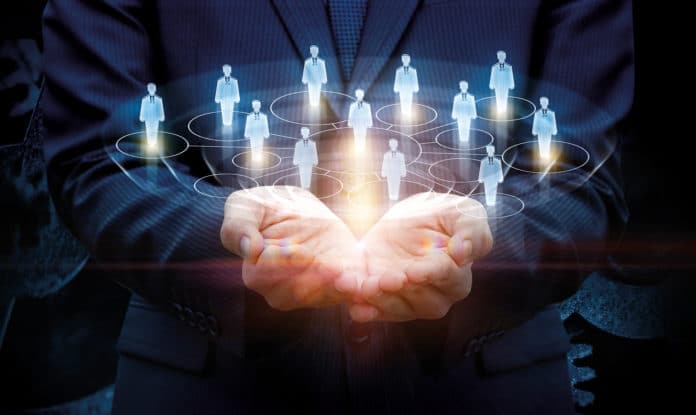 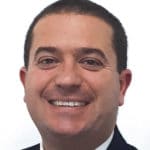 Why should a company assure separation of ownership and control, have a competent board of directors, insure a compensation system oriented towards proper behaviour, have effective risk management and work towards professionalising the corporate organisation?

To put it in a nutshell, why should a company have a good corporate governance system? An initial response could be that it ensures it has the effective and efficient management of a company – an explanation that might, at first glance, seem simple, but one which must be broken down and examined from a number of perspectives.

An effective governance system is one of the main investment criteria for institutional market operators. The Observatory on Corporate Governance Excellence in Italy created by The European House – Ambrosetti has carried out its third survey of a select sample of national and international institutional investors who, overall, manage more than €4,400billion (an amount nearly seven times that of the capitalisation of the entire Italian stock market). The survey asked them, specifically, what criteria they used in selecting potential investment targets (see Figure 1). 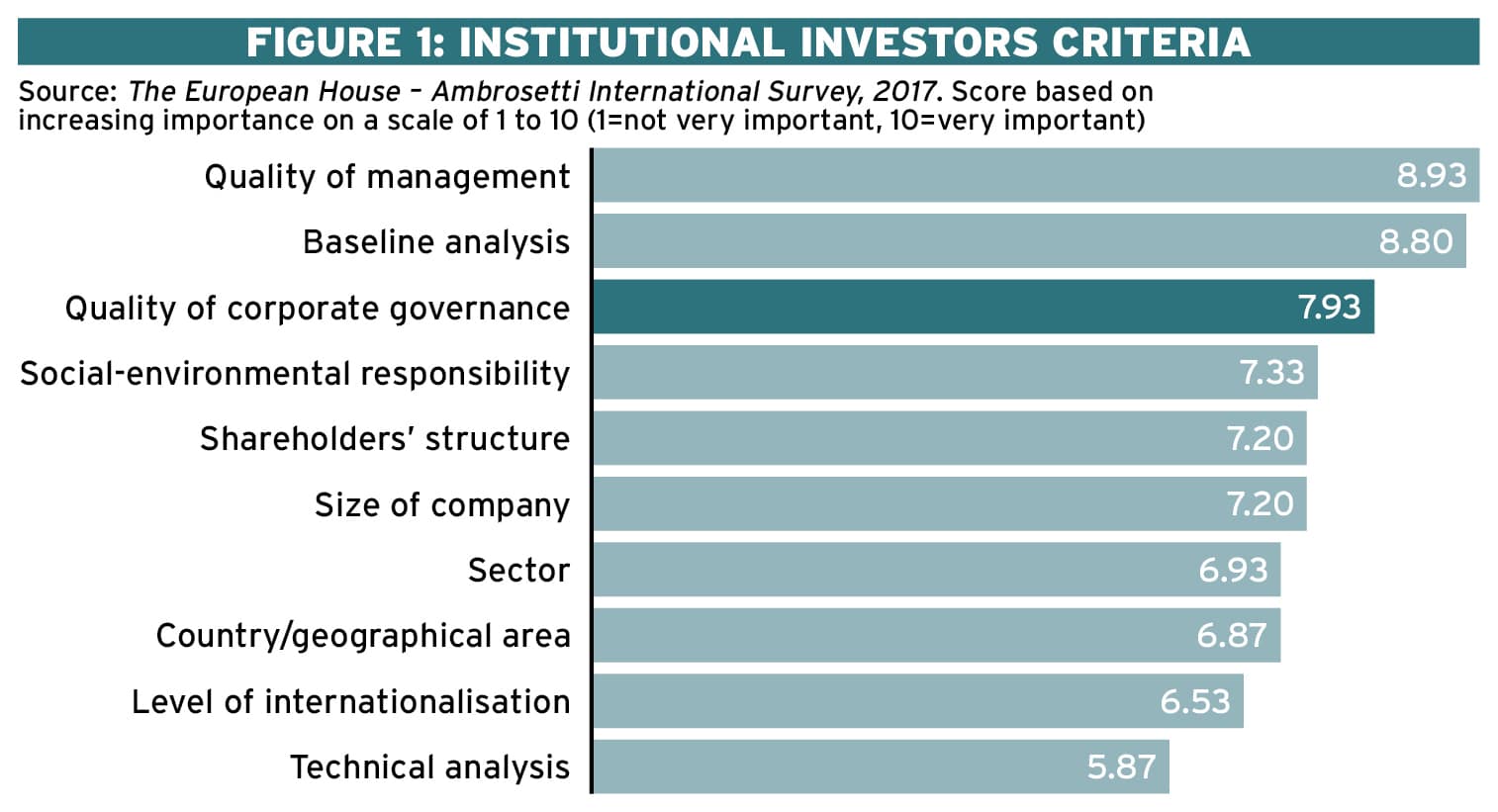 According to the respondents, the most important factor is that of management quality, i.e. the individuals at the top who guide the company. The second criterion is that of company basics involving, essentially, its business, reference geographic markets, sales channels and efficiency. The third key aspect in selection is that of the quality of the corporate governance system. In this regard, the areas that companies should focus on should include:

In the future, governance quality – together with the level of social-environmental responsibility (which came fourth in the survey) – will become an increasingly important criterion in the evaluation process of the institutional investors.

Attracting private capital is even more important for a country, such as Italy, which, firstly, has significant budget restraints and therefore cannot exploit public investment to relaunch economic growth and employment and, secondly, is not at the top of the list regarding foreign direct investment in terms of gross domestic product.

In essence, if a company wants to take advantage of private investment, it must adopt an effective and efficient governance system. This is true not only for large, listed corporations, but perhaps even more so for small- and medium-sized enterprises to allow them to diversify their sources of financing compared with the traditional bank-centred approach in Italy.

Measuring the quality of the governance system: the EG Index

But how can the quality of a company’s governance system be assessed? Motivated by the deep conviction that it is difficult to manage what cannot be measured, in 2010 The European House – Ambrosetti developed a special methodological approach (the Index of Governance System – EG Index) that is able to provide an objective assessment of the quality of a company’s governance system through the mapping of a portfolio of qualitative/quantitative indicators that make up the EG Index.

Focussing attention on the main companies that raise capital on the Italian stock exchange (FTSE MIB index), the EG Index revealed long-term progress: the largest listed companies in Italy have shown continuous improvement in the quality of their corporate governance (see Figure 2). 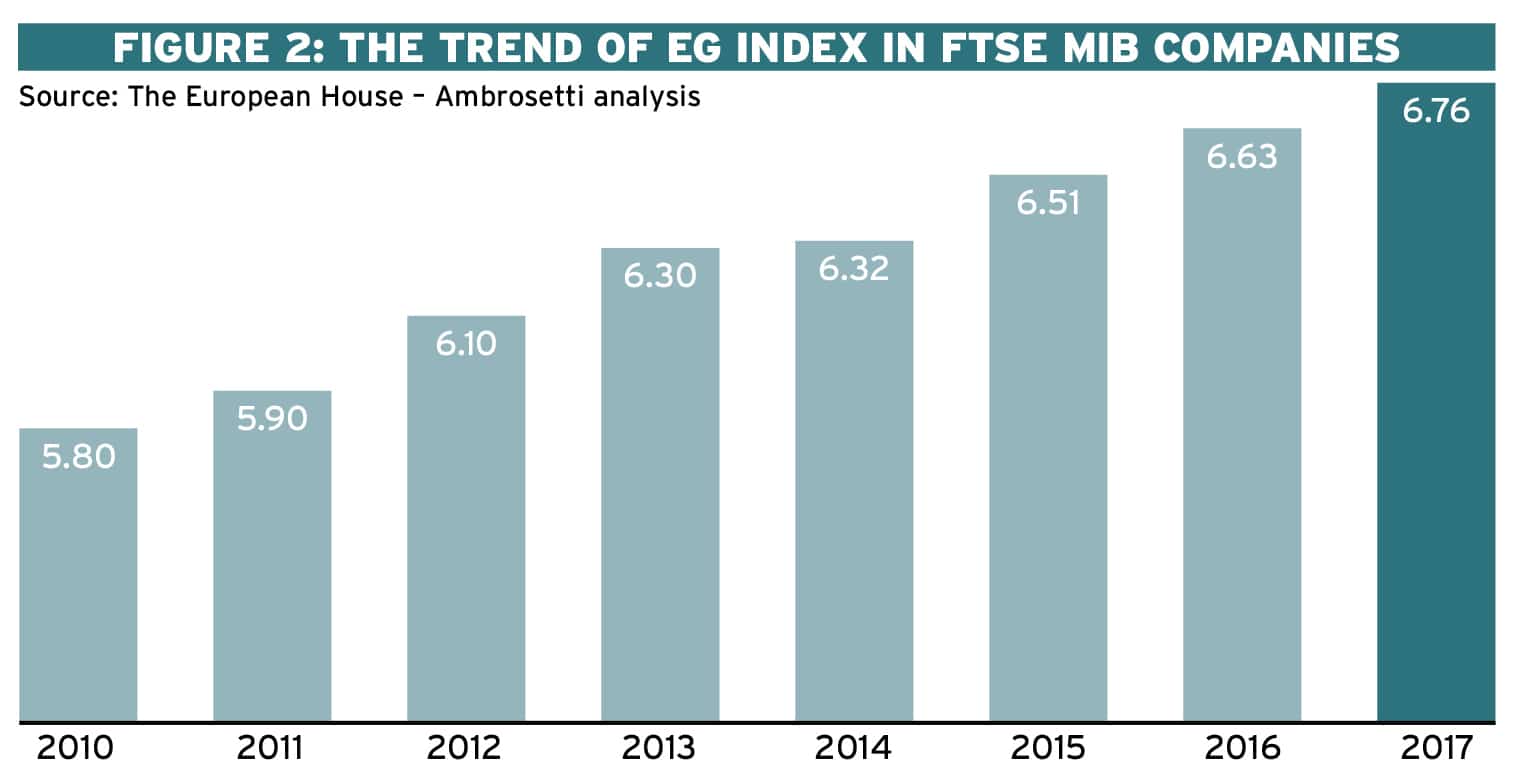 These improvements are undoubtedly ascribable, in part, to new regulations (both regulatory and involving changes in the self-regulating code) that involved the relationship to remuneration, composition of the BoD and focus on risk management. It is undeniable that companies have also invested and worked hard towards improving the quality of their governance systems, especially in terms of increasing the level of regulatory enforcement, but also focussing on the evolution of governance mechanisms that ensure management efficacy and efficiency.

“In essence, if a company wants to take advantage of private investment, it must adopt an effective and efficient governance system”

Support for the push to improve the governance system has come from the awareness of the importance of these issues to institutional investors (as reflected in our survey). The increased weight of these professional operators in the shareholding of more highly capitalised Italian companies has brought about greater rapidity in adherence to accepted good governance practices. For example, on average, for FTSE MIB companies, share ownership of the major shareholder decreased from 48 per cent in 2011 to approximately 37 per cent in 2016 and the difference was essentially ‘compensated for’ by institutional investors. Further confirmation of the fact that firms are increasingly attentive to the needs of the market is that some large institutions, such as Intesa Sanpaolo Bank, have modified their administrative and control model from the traditional Italian model that is essentially unlike any other in the world, to the one-tier system. Among the things that pushed the bank to modify its system was enhanced recognition from institutional investors. In recent days, another major Italian bank, UBI has approved guidelines to adopt the one-tier model, offering the same reasons.

But what are the leading aspects that have undergone change in Italy’s big listed companies?

In terms of BoD composition, in FTSE MIB companies, the share of board members with managerial experience (75 per cent of the total) has increased over time, compared with board members in the ‘professions’ (lawyers, accountants, university professors, etc). The number of female board members has increased significantly, above all thanks to the law passed in 2011. In 2010, only 3.6 per cent board members were women, while in 2016 they accounted for nearly 32 per cent.

The number of independent board members has also increased greatly in recent years, testimony of their importance in promoting effective boardroom discussion. Specifically, in 2010, independents represented, on average, 43 per cent of board members and today they account for 60 per cent. This means, in short, that all board members who are not tied to the company must be in agreement over a certain measure for it to be approved by the BoD (see Figure 3). 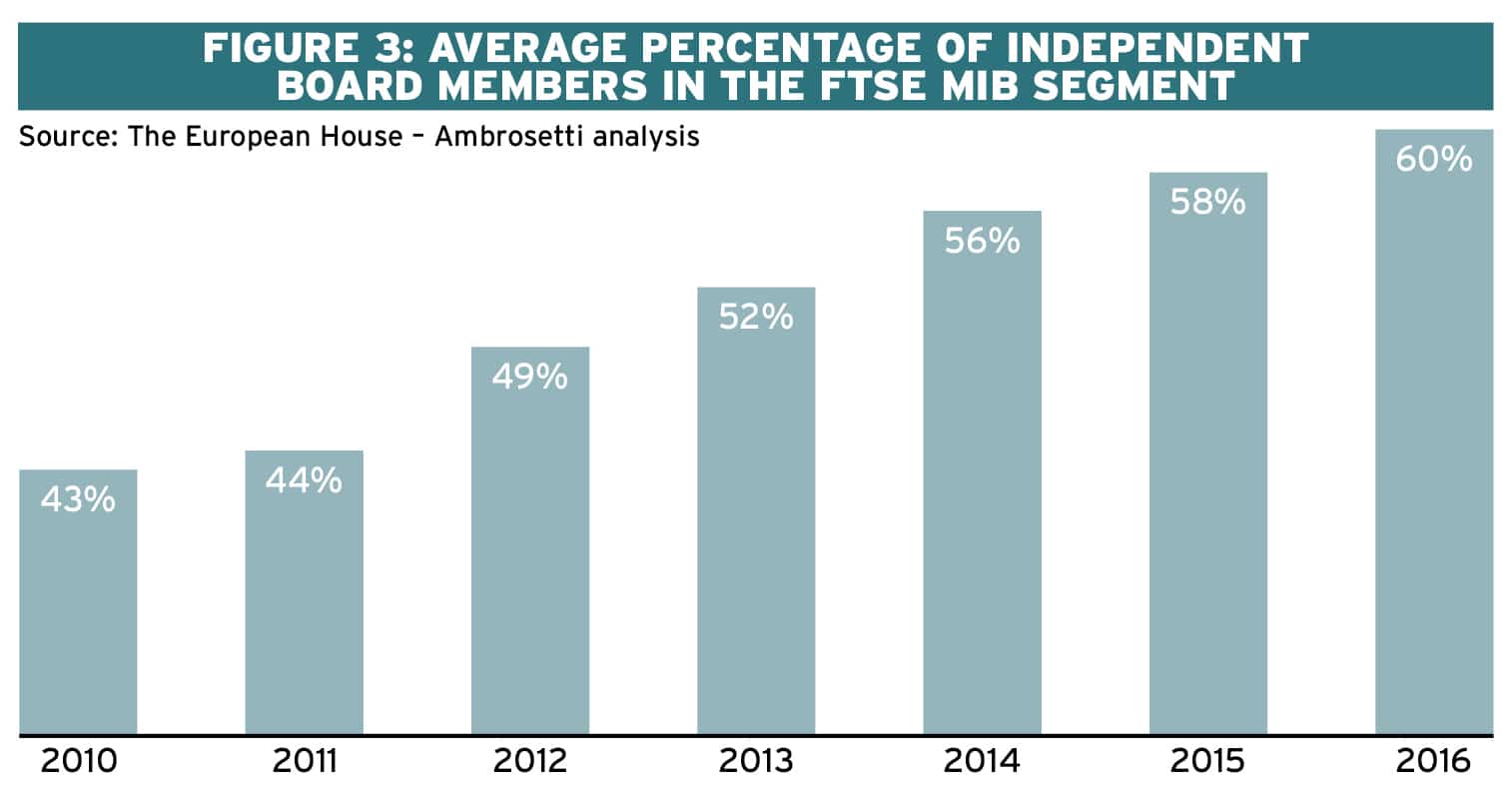 Another aspect in which there has been significant improvement in Italian listed companies is the average number of other positions held by each board member. While in 2009 other positions held amounted to four, in 2016 the number was half that. This trend provides unequivocal proof that board members have matured and realised that their role involves major commitment and responsibility, making it impossible for them to fulfil multiple positions in a conscientious way. In fact, it is not surprising that when appointing a member of the board, many companies have a set maximum of positions the candidate may hold.

Italian issuers have also improved greatly in terms of transparency in their corporate governance report. On the basis of the proposal from The European House – Ambrosetti Observatory, many Italian companies have introduced an executive summary into their corporate governance report that provides a synthesis of the most important points and allows for more rapid and effective reading by external analysts. The remuneration report, introduced in 2011, is among the most complete, including in reference to other markets. The level of disclosure on pay mix, parameters and incentive strategies is on a par with the very mature financial markets of the UK and the US. It is not surprising that Italian issuers have invested heavily in terms of transparency and quality of corporate information since these are aspects that are monitored closely by institutional investors.

A good corporate governance system increases the probability that a company attains value creation performance that is higher than its competitors. For each Italian FTSE MIB-listed company, the Observatory regularly monitors the relationship between its standing in the EG Index and its performance in terms of the relative Total Shareholders’ Return (TSR). The TSR measures the return of capital invested by a shareholder over a given period and also takes into account the dividends paid during the same time period.

For this, 443 companies listed in Italy, France, Germany, Spain and the United Kingdom were analysed. The relative TSR for a European reference peer group was then calculated for each company in the sample in order to sterilise the trends in the various sectors. From our analysis, it emerges that in 77 per cent of cases, there is a correlation between the standing on the EG Index and relative TSR. Companies that invest in the quality of corporate governance are those that are most likely to ‘out-perform’ their European competitors.

Challenges for the future

The major Italian FTSE MIB-listed companies have demonstrated over time an ability to improve the quality of their governance system. As already stated, some of this improvement is exogenous, in the sense that it is linked to changes in primary regulatory measures or recommendations in the self-regulating code. However, a significant part of the improvement is endogenous, the result of the desire of issuers to improve their governance systems in the knowledge that, firstly, this makes it possible to improve the efficacy and efficiency of the management of the company and, secondly, to enhance their attractiveness to institutional investors.

Bearing in mind, however, that improvement in the governance system is more a process than a fixed goal, it is clear that there are a number of priority areas for further evolution. An initial aspect of fundamental importance is improving the level of transparency in the remuneration report in order to provide the market with input that can be used to make a complete and informed assessment about the pay-for-performance principle. This translates into more detailed information in section two of the remuneration report – the section that contains retribution data for the year. In this section, the connection between results obtained and incentives awarded should be made clearer.

A second priority involves enhanced availability of succession plans for the CEO and directors with strategic responsibilities. Just a little over half of the major listed companies have this important instrument. In smaller listed companies, also taking into consideration the greater concentration of shareholders, the succession plan is generally unknown.

But the greatest challenges the Italian market must face are cultural in nature. First and foremost, companies must ensure that the rules that already exist be applied more regularly. Secondly, small- and medium-sized enterprises (both listed and non-listed) must convince themselves of the fact that having a good governance system (a competent BoD, good compensation system, effective risk control system, etc) makes it possible to assure enhanced company management and does not represent – as many businessmen often believe – a bureaucratic constraint. Bearing in mind that the Italian economy consists overwhelmingly of non-listed small- and medium-sized companies, it is crucial that these enterprises understand the importance of good governance. In this regard, the recent publication in May 2017 of the self-regulating code for non-listed, family-run companies would seem a step in the right direction. The code is intended not only to define a number of important principles of good corporate management, but also to spread the culture of good governance among these companies.

‘Good governance’ not only makes companies more attractive to potential investors, but also assures sustainable growth and, over the long-term, guarantees the continuity of the company itself.

He gained experience in primary Italian and European companies in designing and implementing incentive systems for Executive Directors and key managers with the purpose to assure the sustainable performance improvement in the long term. He is Head of the Observatory on Corporate Governance Excellence since 2009. Marco is graduated in Economics at Bocconi University in Milan.