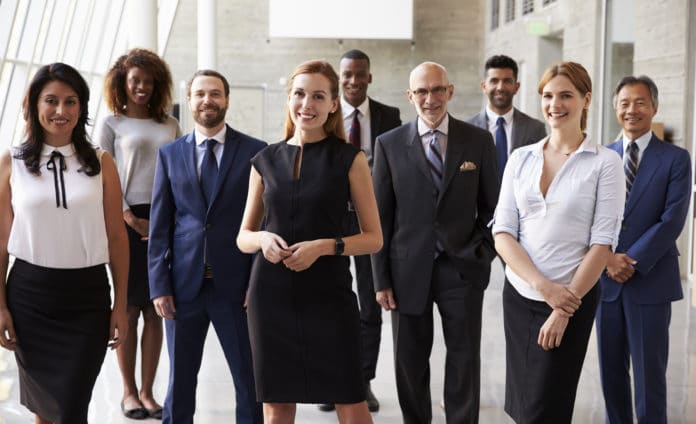 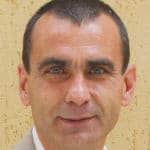 The corporate board is defined as a body consisting of ‘members without executive powers’, according to the European Commission policy on diversity,

In a two-tier system of corporate management, the non-executive members of the supervisory board are the main decision-makers, exercising supervisory functions
over and above the management board and managers. In its policy on board diversity, the European Commission terminology is not clear on the scope of the board in the case of one-tier management systems, but the logic of good corporate practice would suggest non-executive members are also included on the board of directors.

In this article, we consider the ‘diversity of the board’ in reference to the percentage of the members of the supervisory board by profession, nationality and gender.

Since diversity of professions is considered as a key to the effective operation of bank boards, EU rules require members to possess appropriate knowledge, training and skills to provide banks with proper and prudent management. It is recommended to introduce a committee for selecting candidates whose activity is consistent with finding a balance between knowledge, skills, diversity and experience of the board members.

“Given the involvement of the state in the financial strengthening of banks, important areas of professionalism include knowledge of the political environment and legal literacy”

This diversity includes the availability of experience and knowledge from many different fields, such as finance, accounting, crediting, banking and payment systems, strategic planning, communication, management, risk management, internal control, banking regulation, audit, regulations and so on.  Given the involvement of the state in the financial strengthening of banks, important areas of professionalism include knowledge of the political environment and legal literacy and, currently, specific knowledge and expertise on mergers and acquisitions. To achieve professional diversity, it is not necessary that every board member is an expert in each of these areas, but it is of great importance that the board, as a whole, has high erudition and expertise across all areas.

An additional element of professional diversity is conducting training to meet the current needs of banks, such as in risk management and corporate governance practices, and the roles and responsibilities of board members. Board members should also learn how to avoid conflicts of interest.

Our survey on diversity on Bulgarian bank boards ranks professional experience in finance highest (52 per cent), followed by the economy (14 per cent) and management (nine per cent) – see Figure 1 below. In the survey, we take into account another characteristic of professional diversity – the distribution of higher education. For example, economists (44 per cent), financiers (20 per cent) and lawyers (12 per cent). The gap between higher education and work experience reflects the pay gap between the different professions in the local market. 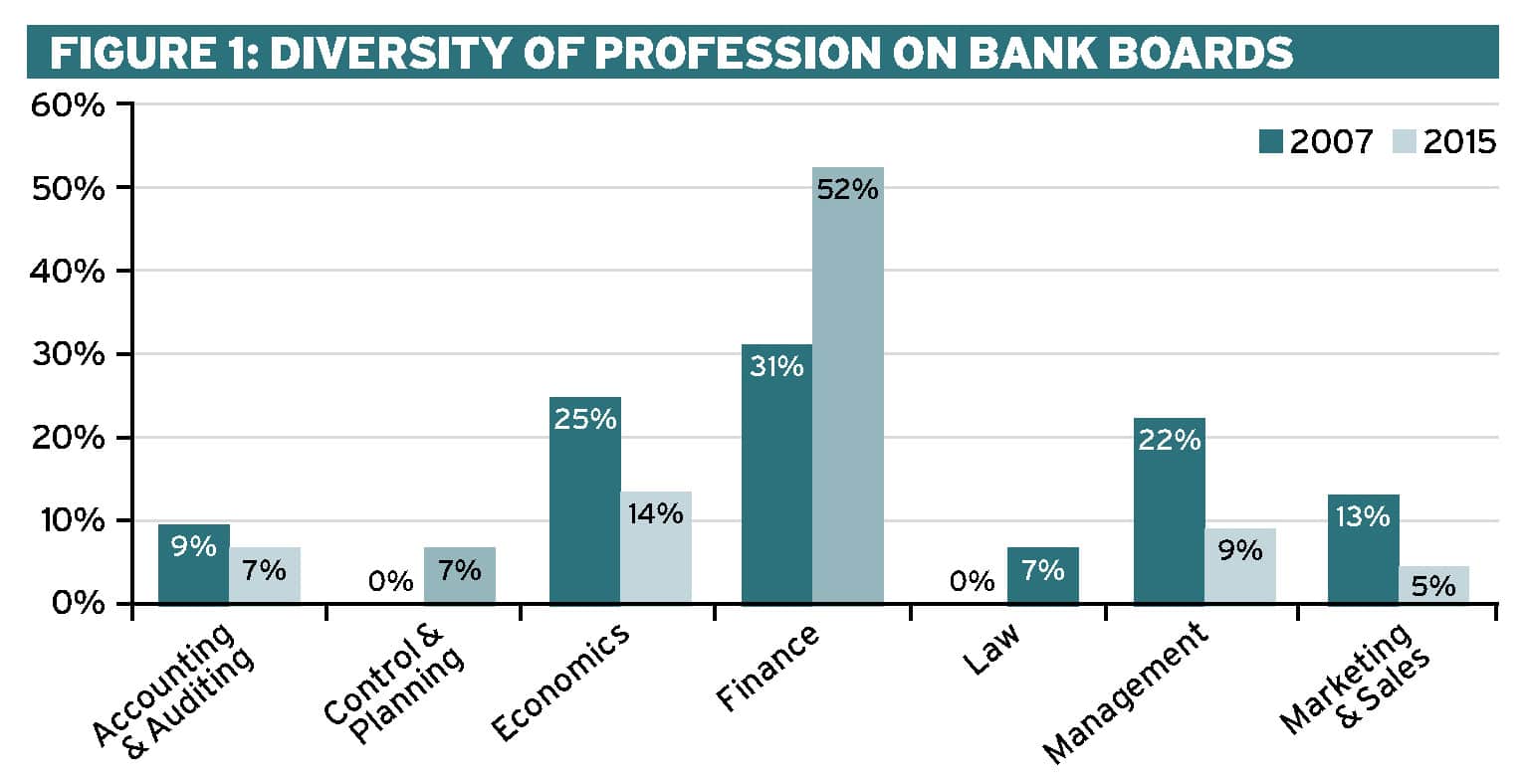 The greatest diversity on boards is in foreign banks – among their directors is a significant number of individuals representing entities, who are majority shareholders without economic experience. The boards of banks with local capital have a great diversity of experience beyond economics – with engineers, diplomats, representatives of healthcare, insurance and pension companies.

Board diversity by nationality

Globalisation defines diversity in nationality when it comes to the composition of boards. The average number of foreigners on EU boards sits at a third. Regardless of the processes of integration and harmonisation, the differences in individual EU countries remain great. For example, in the Netherlands 54 per cent of board members are not native Dutch, whereas in Spain just two per cent are not Spanish. The nationality of board members reflects the origin of the capital invested in banks.

The bank boards in Bulgaria are extremely international – the average participation of non-Bulgarian board members exceeds 58 per cent. This high percentage can be explained by the high foreign share in bank ownership. In 53 per cent of cases, the chairman of the board is not Bulgarian.

In looking at the dynamics of nationality diversity on boards, we will look at the following relationship between capital and representation:

Banks in Bulgaria have found the following cases:

1. In case of ownership outside the EU, the board lacks members from the state providing the capital (e.g. Investbank and D Commerce Bank have capital respectively from Oman and Turkey without a board member from these countries).

2. In cases where the bank capital originates from the EU, board members are mainly from the state providing the capital, but they can also be from other countries, depending on the structure of the banking group. For example, UniCredit Bullbank’s major shareholder is from Italy, but the board has members from Italy, Austria and other EU countries. At TBI Bank, the country providing capital is the Netherlands, but the board has a representative from the parent company, based in Israel. At the subsidiary bank Emporiki Bank – Bulgaria EAD, which has Greek capital, the board includes a Greek citizen, as well as a French citizen, France being a major source of capital. The situation is similar in the case
of MKB Unionbank, where the board has representatives from Hungary as well as the ultimate owner, Germany.

3. As a result of the effects of the global crisis, boards can include members whose nationality does not reflect the country which provides the capital nor the structure
of the banking group (for example, the board of Societe Generale Expressbank, where the investment comes from France, has a French and Italian citizen on the board.

An EU requirement to have more gender diverse bank boards does not confer automatic and unconditional advantage of the underrepresented gender compared to other candidates for appointment, but it does aim to change attitudes and culture over time.

The issue of increasing participation of women in all areas of business, including on boards, has great social resonance. But while it is easier to measure an increase in their presence, it is harder to explain the reasons behind it. The study shows that measures to increase the number of women on boards occupy a leading position among the initiatives undertaken to diversify boards.

Over the last decade the statutes of companies resemble constitutions of countries – like them, they contain declarations of gender equality, which are transformed into demands for diversity with preserved quotas for women on the boards. The practice of individual countries, however, marks a variable success in the implementation of these requirements. The most significant progress in achieving gender diversity is in countries that have introduced mandatory measures, while those relying on self-regulatory initiatives have not reported significant achievements.

The average share of women on the boards of banks in the EU is 12 per cent. In most member states, nominating committees have been created, which decide on the target level of representation of women in the governing body and develop policies to increase their number.

The highest average representation of women on the board is in France (41 per cent), followed by Sweden (33 per cent) and Spain (25 per cent), while the lowest is in the Netherlands (18 per cent). Norway achieved the impressive 40.2 per cent participation of women on boards, due to legislation providing a quota and sanctions, including the deletion of the company and delisting from the stock exchange in violation of the quota.

In Eastern Europe, women occupy 35 per cent of senior management staff. The high value of diversity is explained by the legacy of the communist regime, under which gender equality was a universal principle.

In regard to the requirements for achieving gender diversity, the trend in Bulgaria is relatively constant – 16 per cent of members on bank boards are women. The positive dynamics in this area are due to the fact that in 2015 two banks have a woman as a chair of the board (Bulgarian-American Credit Bank and Investbank) and in one bank a woman is both representative of the qualified shareholder (61.43 per cent) and a chair of the board (Bulgarian-American Credit Bank). In most cases, women participate in banks with local capital and with a small share of the banking market, and represent the majority shareholder, who is typically a foreign entity. The banks with nationality diversity are without a broad representation of women (these are mostly subsidiaries of large banking groups that operate across the EU).

The survey highlights the qualitative dimensions of diversity on bank boards in the EU and internationally. Regardless of the time of application, the three components of diversity of profession is given a leading role in shaping boards while diversity of nationality is most apparent on boards of subsidiary banks in their host country. The last component of diversity, gender, is the first in history and is the most difficult to quantify an impact, besides achieving certain social expectations.

The study shows that board diversity at Bulgarian banks is above the EU average. Board diversity is determined by environmental factors, such as legislation, path dependence and parent bank practices. The greatest diversity on boards is nationality, due to a prevailing foreign ownership, followed by gender diversity and professional diversity.

Miroslav Nedelchev is an Executive member of Bulgarian Institute of Directors. His activities are related to key case studies in the new reality. Well known as a researcher and professor of good practices on corporate governance. He is author of a number of articles and head of interdisciplinary projects. Self-made man and cultural heritage tourism fan