The sustainability discourse, underpinned by the growing concern that the Earth’s bio capacity has been overshot due to excessive consumptive patterns and manufacturing practices, has gained more and more prominence over the years.

The imperative to build a long-term business model that is cognisant of the impacts, risks and opportunities of the environmental, social and economic contexts within which an organisation operates, has increasingly become part of the licence to operate for companies across the globe. Investors also progressively recognise that they can no longer ignore these elements when performing fundamental analysis and evidence is mounting that companies who integrate broader sustainability considerations into their value proposition, position themselves for better performance in the long term.

Within this discourse, the financial markets and, in our context, capital markets are increasingly in the spotlight as both contributors to the systemic nature of the issues underlying unsustainable development, as well as being key players in the drive to resolve some of these issues. Stock exchanges, as a subset of capital markets, play an important role given that public markets tend to require higher levels of governance and transparency and can be seen as fostering more responsible practices by listed companies.

The JSE and sustainability

As regulator of market participants and facilitator of trading across a range of asset classes, the Johannesburg Stock Exchange’s (JSE) approach to sustainability is multi-faceted, aiming to influence corporate and investor behaviour in a positive manner through high regulatory standards, products and advocacy, while working to facilitate engagement with investors.

In the primary market, our listing requirements incorporate mandatory governance obligations, such as separation of the roles of CEO and chairperson. Listed companies are also obliged to report annually on the extent to which they apply the principles of the King Code on Governance or to explain deviations therefrom. This requirement has been in place since the first iteration of the King Code in 1992.

While the initial bold step to incorporate governance into the listing requirements came at a time when governance was not popular and when some ideas were met with resistance, the JSE persisted and today is proudly recognised as the best in the world for its regulation in the World Economic Forum’s Global Competitiveness Report, a position held for five consecutive years. With the advent of the Third King Code (King III) in 2009, companies have needed to move towards integrated reporting or explaining why they are not doing so since March 2010 – making the JSE the first exchange globally to include a mandatory element to the move towards integrated reporting.

In the secondary market, our flagship product is the JSE Socially Responsible Investment (SRI) index which, at the time of its inception in May 2004, was a pioneering initiative as the first index of its kind in emerging markets and the first to be created by an exchange. Coinciding with 10 years of democracy in South Africa (SA), the creation of the index sparked a new wave of debate around how to conduct business responsibly, taking into account some of the transformational issues facing the country.

The SRI index in focus

Listed stocks in the FTSE/JSE All Share index (approximately 160 companies, 99 per cent of the JSE’s total market capitalisation) have been assessed annually over the 11 years of the index against broad-based criteria spanning environmental, social and governance (ESG) policies and practices. Inclusion of local peculiarities, such as skills development, Black Economic Empowerment (BEE) and HIV/AIDS, ensure a response to national priorities. In 2010, climate change was introduced as a focus area of measurement, as a move to spur local companies to consider potential risks and disclose emission levels.

At the time when the index was launched, it was voluntary for companies to participate. Over the years and in response to the demands of investors for greater transparency and predictability, the index evolved to automatically assess companies, starting with the Top 40 in 2007, adding the Mid Caps in 2008 and the Small Caps from 2013.

The impact of this move was clearly seen in the expanding index constituency. Blue chip companies always performed well with an average of 34 Top 40 companies achieving inclusion with each index iteration. However, the medium-sized companies responded to their automatic assessment by improving their success rate from below a third of the companies to over half of the Mid Cap companies being included. While the Small Cap companies have not made a similar strong showing as yet, company-initiated engagement from Small Caps increased exponentially over 2013 and 2014, and the highest success rate was achieved in 2014 with 11 Small Caps qualifying (Figure 1). 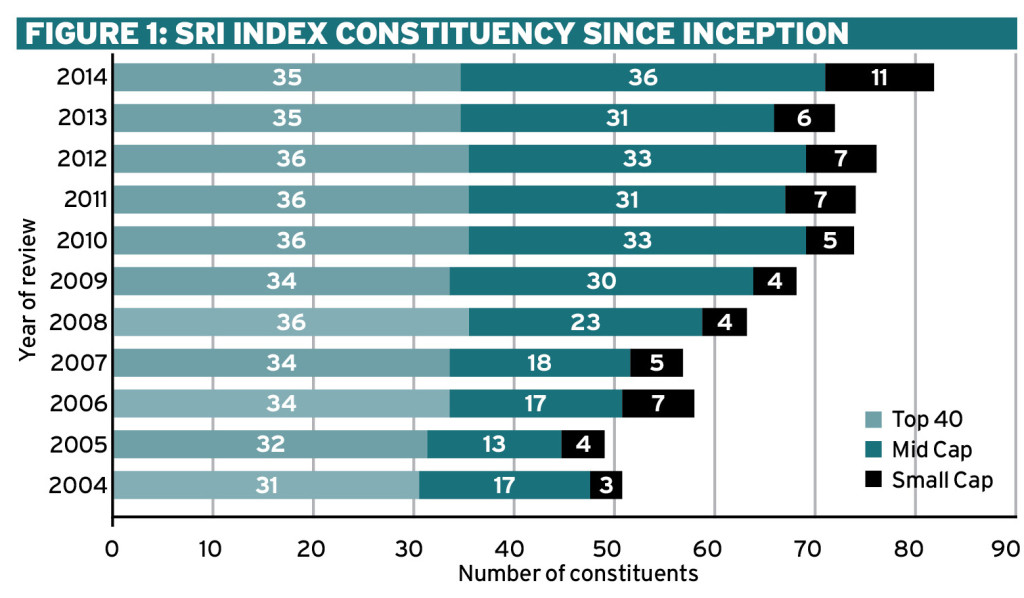 The overall index constituency reached a record high in 2014 with 82 companies qualifying for inclusion, well over 85 per cent of the exchange’s market capitalisation. The SRI index follows a positive screening approach with no exclusions based on economic industry activity. This has ensured that the index has remained reflective of the key sectors that make up the domestic market, such as resources and industrials, financial services including banks, food producers, retail and real estate. An environmental sector classification allows differentiation in the requirements across industries with varying impacts.

Traditionally, SA companies fare well in the social area with stakeholder engagement and community investment always showing good performance. Attributable to the impact of the King Codes, governance has been the strongest element with more than 90 per cent of companies meeting this area consistently over the last three years. Since 2013 the index has honed in on the disclosure imperative by requiring that all information being assessed must be found in the public domain in order to be considered for the index.

Responsible investment and impact of the SRI index

Feedback from our listed companies indicates that, beyond their own convictions to be proactive in managing sustainability risks and opportunities, increased engagement by investors would provide significant impetus to expanded implementation and continued improvement in performance. To then see investment decisions be based on strong sustainability management and performance would be an even more definitive stimulus in this regard. The index has become a benchmark for companies and investors alike, creating a channel for engagement. One formalised initiative to support this is the annual JSE ESG Investor Briefing where companies have an opportunity to present their sustainability strategies to institutional investors.

While the move for institutional investors to integrate ESG principles into investment decisions is a complex process that touches on relationships and mandates along the investment value chain, the imperative created through the Code for Responsible Investment in South Africa (CRISA) and the Pension Funds Act Regulation 28 requirement that ESG factors be considered, is driving change. Leadership displayed by the Government Employees Pension Fund of South Africa and other local signatories to the UN-supported Principles for Responsible Investment (PRI).

As a crucial entity in the economic value chain, the JSE sees itself as ideally positioned to promote corporate transparency and the investment community’s reliance thereupon. Committed to remain on this journey, we look forward to building on the foundation laid through initiatives such as the King Code and the SRI index, combined with the tireless work of leading corporates and the dedicated individuals within them, to continue breaking ground in the mainstreaming of sustainability reporting.

It also remains a pressure point for the JSE to galvanise investors to incorporate ESG into investment analysis, with 2015 seeing a shift to a new model that will enable greater access to investment-grade sustainability data. Going forward, the JSE will also continue participating at a global level. Our association with the Sustainable Stock Exchanges Initiative and the Sustainability Working Group of the World Federation of Exchanges (which we currently vice-chair) are invaluable in this regard, as are our relationships with our peers.

Following a position as legal advisor to SAFEX (The South African Futures Exchange), Corli Le Roux joined the JSE in 2001 following the acquisition of SAFEX by the Johannesburg Stock Exchange (JSE). As part of the Legal Counsel team at the JSE she was involved in various legal matters and responsible for the JSE’s trade mark portfolio.

Her responsibilities expanded into various strategic arenas, and as a result she has since 2002 been responsible for the development, operation and evolution of the JSE’s Socially Responsible Investment (SRI) Index, a pioneering initiative through which the JSE has been providing thought leadership around sustainability and responsible investment. In continuing to oversee the SRI Index and its strategic progression, Corli’s role includes operational supervision, managing external relationships, agreements and strategic discussions with service providers, partners, clients, media and key industry players, as well as providing strategic input into the implementation of a sustainability framework for the JSE.

Corli has authored articles in various local and international publications, and speaks locally and globally regarding responsible investment, the SRI Index and its development, and sustainability concerns generally. She represents the JSE in various fora, including the Integrated Sustainability Task Team for the Third King Report on Corporate Governance in South Africa (King III), the Integrated Reporting Committee of SA, its Working Group and the IIRC Pilot Programme regional network, the UN Principles for Responsible Investment (PRI) South Africa Network and the Consultative Group for Sustainable Stock Exchanges Initiative. Corli is currently the Vice Chair of the World Federation of Exchanges Sustainability Working Group, and was a finalist for South Africa’s Most Influential Women in Business and Government Awards 2011/2012.