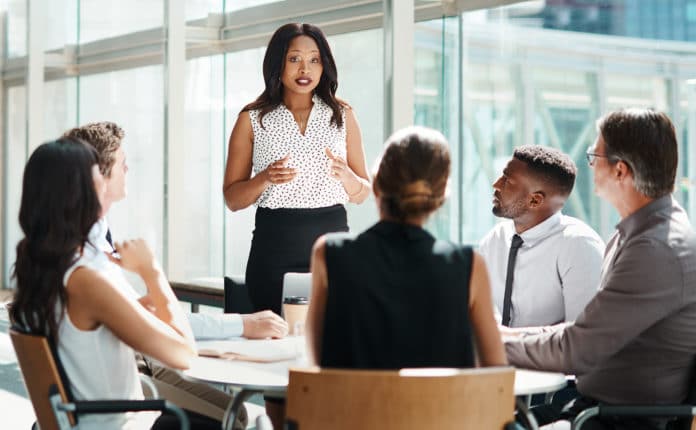 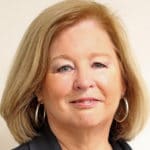 No board chair or executive team ever says ‘let’s go and look for some incompetent people to serve on our board’. Nor do they say ‘let’s look for board members who look and think exactly like us’. Yet, all too often, these things happen in practice. Why?

What boards and nominating bodies do want are board members who also are not only highly competent but who together bring a mix of skills sets and experiences to the table. In other words, they want a diverse group of directors who can do the job.

And yet, despite their best intentions and desires, boardroom diversity remains elusive. So much so that many boards have been throwing in the diversity towel. In 2019, PWC’s Annual Corporate Directors Survey revealed that support for diversity is fading. Even though there is significant research indicating that heterogenous teams tend to make better decisions, boards are giving up on their quest.

Several years ago, I was part of a team that researched and wrote a seminal research piece for The Conference Board of Canada about diversity on boards called Women On Boards: Not Just The Right Thing, But The Bright Thing. We found that homogenous teams tend to be more cohesive and bring about high satisfaction among members of the team. But, heterogenous teams tend to make better decisions, because they have a much better process for fact finding and identifying alternatives, airing dissenting views, and therefore deliberating and coming up with – potentially, at least – a better decision at the end of the day.

This is relevant because it identifies one of the key reasons why boards seem to keep hitting against a glass ceiling when it comes to the percentage of board members that are women, visible minorities, ethnically diverse, have diverse cultural heritage backgrounds, and even have different educational, socioeconomic or geographic backgrounds. Differences can also be in thinking styles, learning styles, personality types, problem-solving styles and professions.

Building a board is hard work. That work is made that much more difficult if we make one or more of the three most common board diversity mistakes.

Lots of boards or nominating bodies begin their board renewal process by asking the wrong question. When faced with filling a vacant position they ask, ‘Who do I/we know?’.

Sometimes, this approach works. Often, it leads to a less diverse and value-added board.

It is easy to recruit people you know. It’s comfortable to follow the path of least resistance and embrace what we know and who we are at ease with. It is harder to take the time and effort needed to build diligent processes for board renewal.

When we apply social science research to boards, it tells us that it is human nature for boards to replicate the current board member profile. We call this the ‘Napoleon syndrome’ because of an old legend that is told about Napoleon, the emperor of France. He was reputed to be a fairly short man, and he was also supposed in this legend to be self-conscious about his height. So, when he chose his generals, he tended to choose men – soldiers, officers – who were a little bit shorter than him. Then those generals in turn chose colonels who were just a little bit shorter than them. And the colonels chose  captains that were just a little bit shorter than they were.

Even though this story is almost certainly untrue, what it illustrates is that it’s human nature to surround ourselves with people who are similar to ourselves and might even have a little less than our capacity. It makes us feel better, we tend to work better together, we’re happier and we’re cohesive. We have board meetings that go well, we finish the agendas on time, and we’re all getting along. But, at the end of the day, we’re missing out on a great deal of fact finding, divergent thinking, ideation, alternatives, and airing of dissent, that can only come as a result of having diversity in the broadest possible sense around the boardroom table.

Much-needed diversity around the board table can only be achieved if we actively seek it. We keep hitting a glass ceiling by design. It is just because it’s easier for us to maintain the status quo.

Ask the right questions, design the optimal board, and invest the energy it takes to recruit diverse board members.

The second mistake boards make in diversity is having ‘either… or’ thinking. Many assume they need to give up competence for the sake of diversity and often equate gender with diversity. And when we hear the word ‘diversity’ in relation to the board, the first word that comes to mind is gender. The thinking goes like this: that to add women to the board means the board needs to place competence below the need for gender diversity.

As a woman, I can assure you that none of us wants to be considered the ‘token woman’. To think that we are getting a board seat by virtue of our gender is an insult. Many women have tremendous skills and experience to bring to the boardroom, just as many men do. Equally, there are many men who lack the competence to serve on a board, just as many women lack the needed skill set. Hear me when I say, you should never give up competence for the sake of gender, or any other visible form of diversity.

To ensure the diversity strategy of the organisation is viewed as a legitimate process, all board selections must be made firstly on merit, while at the same time reflecting visible and other diversity needs. It’s a cas of ‘both… and’, not ‘either… or’. Legitimacy is enhanced when a board is populated by respected, experienced, senior leaders.

Diversity strategy is no different than any other corporate strategy. It should be a well-considered legitimate process, based on needs and benefits. And there are significant benefits that diversity brings.

Diversity of thought makes prudent business sense. Research shows that having a board composed of men and women with diverse skills, experience, backgrounds and perspectives means:

All board appointments must collectively reflect the diverse nature of the business environment in which the organisation operates. And they should be made on merit, in the context of the skills, experience, independence and knowledge needed for the board to be effective.

Benjamin Franklin is believed to have said ‘those who fail to plan, plan to fail!’. Churchill is credited with saying ‘those who fail to learn from the past are doomed to repeat it’. A third common mistake is that many boards say they want to be diverse, but they don’t create a plan for it, and with every new open board seat they repeat that pattern.

Board renewal towards the goal of diversity in leadership, including in board composition, requires intentional effort and planning. Those who have succeeded in building value-added diverse boards started by planning. Their plans have five common steps:

1. They approve a formal process and board matrix. The formal process typically includes a comprehensive board profile or matrix of the optimal board, based on the strategic needs and environment of the organisation. A robust assessment of current board members against the profile is conducted to establish any gaps that need to be filled. Recruitment is focussed on filling those gaps. For the purposes of board composition, diversity includes, but is not limited to, business and industry skills and experience, gender and ethnicity. It makes good business sense to take advantage of differences and distinctions among individuals in determining the optimal composition of the board. Here are other steps in the best boards’ plans: 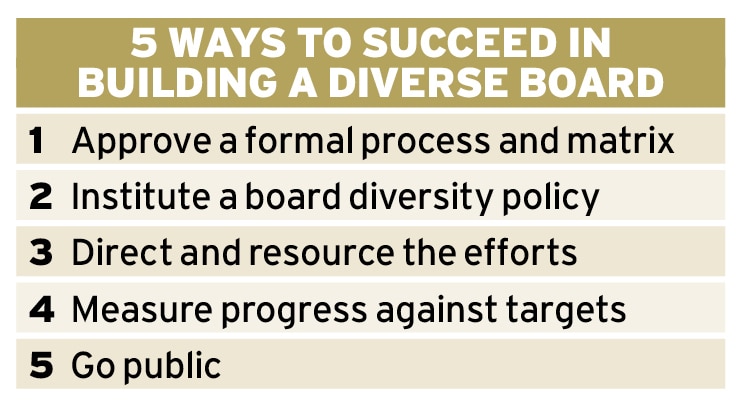 2. They set policy. The board enshrines a board diversity policy that includes rationale, principles, process and targets. For example, it is common to see a target that aspires to maintain a board in which each gender represents at least 40 per cent of individuals. Having a diversity policy is not a predictor of how diverse your board is. But it is a great first step towards it.

3. They give direction and resources. What is it they say about the best laid plans of mice and men? They often go awry! If a plan is not resourced and measured, it will not happen. Boards that succeed in reaching their diversity objectives, direct their search consultant, or those tasked to recruit candidates, to deliver a gender-balanced slate of diverse and equally qualified potential candidates. If you are not intentionally looking for something and applying resources to the search, don’t be surprised if you don’t get what you are looking for. 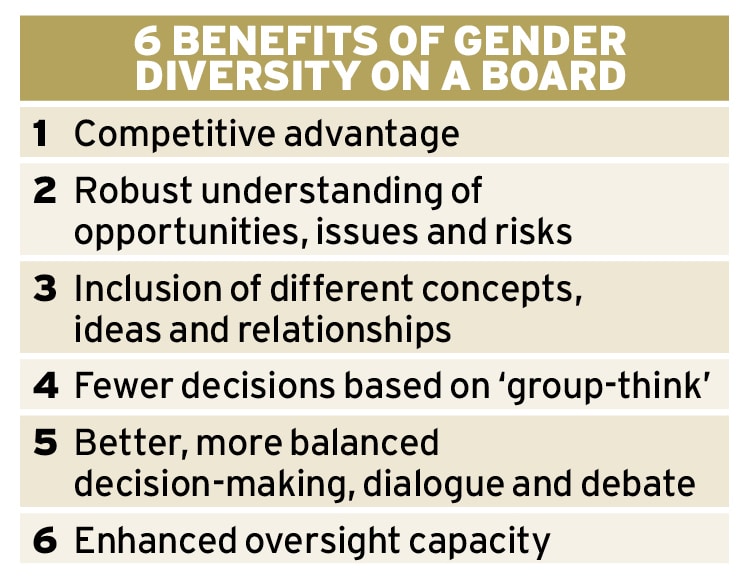 4. They measure progress. The board terms of reference and annual workplan require an annual assessment of progress against targets, the effectiveness of the process, and currency of the matrix and gaps. They also track the annual board evaluation results to assess the overall improvements in board effectiveness over time. In this way, they can check if improved board diversity has had a positive impact on overall board performance.

5. They go public. They report annually, in the corporate governance section of their annual report and on their website, progress with respect to their policy and targets related to board diversity. They view going public with a board diversity strategy as a helpful step in terms of holding themselves accountable, setting an example, and providing thought leadership in their industry or jurisdiction.

The key point here is that board renewal is enshrined at the board level. They approve the matrix, they set the policy, they hold themselves accountable by reporting publicly on progress toward their targets.

‘Diversity strategy is no different than any other corporate strategy. It should be a well-considered legitimate process, based on needs and benefits’

According to the Canadian Gender & Good Governance Alliance, ‘board gender diversity is a matter of good business as much as an issue of fairness. An extensive body of research exhibits a significant relationship between board gender diversity and corporate performance’. In other words, it makes good business sense to pursue a well-rounded, diverse and credible approach to ensuring board and leadership diversity. So, you had best have a plan!

Avoiding the top three mistakes described above, puts some real power in your corner if you want to make progress in your diversity objectives. Don’t take the easy route. Ask the right questions. Think ‘both… and’. Have a robust plan complete with process, policy, performance measurement and public reporting. With effort and in time, the harder road will eventually become the smoother path.

Debra Brown is the founder, President and CEO of Governance Solutions Inc. Since founding GSI in 1991, Debra has developed it into a full-service firm providing governance consulting, research, training and tools. Additionally, Debra is the founder and a lead faculty member of The Professional Director Certification Program™, a world class, online director education and certification program.

Currently, Debra serves on major international boards, and has worked in corporate governance in North America and as far afield as Malaysia, Bahrain and Guatemala. She is an acknowledged and sought-after thought leader in corporate governance, authoring over two dozen major research articles published in Canada and internationally. Prior to forming Governance Solutions, Debra spent several years in the Canadian financial sector, working most recently as CEO.